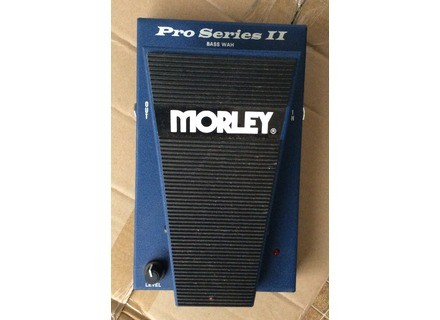 Morley Pro Series II Bass Wah
4
I got this pedal as a christmas gift, but I think it was around seventy dollars. I dont know where its from.

This wah pedal is very good if you like playing clean toned guitar. The wah sounds good and clear, and the pedal is easy to press, and is fairly comfortable. It has level control, to change the amount of wah that you get. I found this very useful and practical, and there is also a led light, so you know when it's on, which is good.

Something that really disapointed me with this pedal, is that if you use it with heavy distortion, it has virtualy no effect anymore, and you don't even notice if your using it or not. Since I like to play rock and heavey metal, It's really not that useful to me. I didn't like that the on/off switch was very close to the pedal, so it was a bit hard to hit sometimes

This is a very sturdy and heavy pedal. It should last a long time. I already mentioned my problem with the switch, and I also thought the battery cover was a bit strange to put back on.

If you like playing clean toned music, this pedal is perfect for you! But if you're a metal jockey as myself, stay far away! It's a good price, so all in all, it's a pretty good pedal. I give it a 4.

Morley Pro Series II Bass Wah
5
A simple pedal specially conceived for bass, without switch, it triggers automatically when the foot support thanks to a top optics (Therefore, no "click"). A single knob that plays on the level output level of the effect.
construction is foolproof. The case is metal, the pedal is not "heavy", but we feel that it's tough. The only problem I had at the beginning is that it squeaked, I just oiled a bit, I have not had a problem since (it should be almost 8 years that I have).
There is a standard 9v adapter (I plug in my Big john, no buzz bp).
I bought 170 euros new at the time, without VAT because it was an old model that was no longer (replaced by a more modern).

No manual, no needs! Turning the knob to the strength of the effect desired, and set foot dessu. When we removed the foot, the pedal stops automatically (as indicated by the LED). The spring ensures automatic revoi.

I play mostly metal. I do not know if it was his favorite sector, but the wah has power and works very well for that. With my EBS valve drive, make a profit, I can play Anasthasia Cliff Burton with his volcanic! In clean, it notes treble (no joke!) And I'd say it distorts the sound a bit, giving an effect one can dirty. that's what I liked about this pedal. Lowering the knob leveml still produces the same sound, but less safe, less dirty, and you can not have a good feeling problem Funky. In any case, this pedal allows you to have a real role lead.
And the little thing that I love is that when stops the pedal on some points when playing distortion, can hold larsens (note changes depending on which one is poind) that provide sound really locked. This is really to make the solos was Cliff Burton!

As I said earlier, I have 8 years soon, I've never had a problem, it's very strong, I trust it has Morley. I just tried a crybaby guitar which had not agreed (normal), and a crybaby bass I had not liked it when a priori similar characteristics (the outbreak had an automatic delays when the rising foot, and had a low lead role least I think).
I'm not ready to separate myself, especially my familiarized it's no longer produced (she has to be launched in 1992, is the date marked on the printed circuit board) has been replaced by a version with a switch allows easy to choose between two wah sounds. I do not know what it's worth, I guess it is very good too, but I do not need more.
If you want a wah and you see the occas' go for it at least to try it well deserves it (in any way, you will end up buying it!)