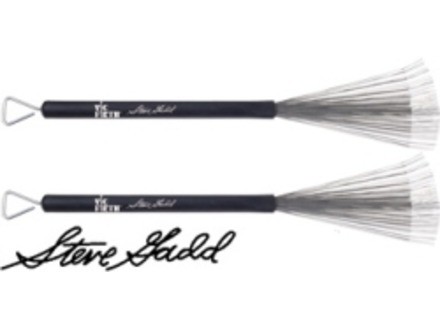 There normally isn't a lot that can be said about drum sticks and brushes.  The Steve Gadd Signature series deserves recognition because this combination has permanently worked its way into my playing.  I Love both the sticks and brushes more than any other brand or line and they have serves me well for years.  I am going to review both products, although the brushes are the only ones featured in the picture.

The Steve Gadd sticks are excellent.  They are a little on the lighter side, if you are into that sort of thing.  They have an interesting cylindrical head, not too angular or round.  It produces really nice strokes on the ride and the shoulder crashes nice.  There are both wood and nylon tips, I always prefer wood for sound.  Nylon is better for durability.  These sticks have served me well, although I have broken them on a few occasions playing live because they are light.  They have a black coating which feels similar to the natural wood.  It is a good balance of grip, but not too much friction.  These sticks are very similar to the Dave Weckl signatures, which are also very good.

The brushes are really cool because they have a unique set of wires.  The first 3/4 of the wires are angles to a different degree than the normal wires, so the ends are lifted up slightly.  This helps prevent the brushes from getting caught on a really rough coating on a snare, and helps let them glide more smoothly.  Of course, drummers have been playing without this technology for hundreds of years.  It is just another minor improvement that is really nice to have.  Other than that, these brushes are as good as the normal Vic Firth brushes.  I love Steve Gadd for his playing and influence, but I also love him for the great products he has helped develop.  These sticks/brushes are excellent.
Did you find this review helpful?yesno
»

Vic Firth Signature Steve Gadd
4
I have used the Steve Gadd Signature sticks made by Vic Firth and they just weren’t the right sticks for what a played. I play primarily metal but I am also in a jazz band. The stick gives your ride cymbals awesome definition and they dance across every surface of the cymbal, but when you use it on the crashes, it makes it way too quiet. The hats on my set are 15” and these make them have a nice clean closed sound, but once open they have issues with the volume.

My other complaint is that these are just way too thin of sticks to be paying $7.75 for them. They break very easily if you use them for too long of a duration. These also make my toms sound too dull and lifeless for my sound. They are also very light, almost too light. I have used the the SD9 Driver, and multiple Vader and Zildjian sticks. My personal favorite is the SD9s, which have a better balance and control than the Gadd signatures. The tip on these is very good for ride cymbals, as said before, but the rest of the stick is really lacking. They are actually extremely brittle for being from Vic Firth, whom I believe make very good sticks.

The design does look good, but comes up lacking in performance. These sticks also have an issue with puncturing the drum heads on my drums, not all the way through, but still pretty far. Overall, I would say that these sticks are best for light players who don’t want to overpower everything else. I would save my time though and buy the SD9s. Since buying my SD9s 2 months ago, I have not bought any new sticks. SD9s are the way to go, they are the best stick I’ve ever used.
Did you find this review helpful?yesno
»

Pierrotws's review (This content has been automatically translated from French)

Vic Firth Signature Steve Gadd
5
I use these sticks for over a year now. I find they are enjoyable particulirement at the thickness. The olive "barrel" is trs apprciable because it provides excellent rebound, with the trs Submitted without being aggressive. Ideal for all styles of music from the metal.
These are the best sticks I've ever tried and I've done almost all the sticks of the famous Pigalle shop (no ads

).
This is the only inconvnient black varnish which is trs Aesthetics and removes the "hook" of wood but APRS an hour of play, sweating is lgrement felt. Just spend a little bit our hands (it's my personal pants and saw the amount of perspiration that DGIG a normal hand, there's no big deal)
I have a friend who plays on a very close MODEL another brand and no varnish, no problem of transparency, but the coating also has advantages over the rapidity of the game
Deprecated but those who tend to lose the stick version CONTRL Christian Vander, and then do the same, buy a quiver ^ ^
Did you find this review helpful?yesno
»

Parasite54's review (This content has been automatically translated from French)

Vic Firth Signature Steve Gadd
5
Beware the photo does not match! I'll talk about that (no brushes)

Suffice to say that they throw the casserole! These are wooden sticks in black lacquered wood with the tip nail (the end is not white, it is colored wood). Initially I was taken just for their style black I liked very much! And it's not just their look that I liked the chopsticks are the nicest I had to take in hand. It is fairly thin and lightweight. <span style="font-family: Verdana, Arial, sans-serif; font-size: 11px; line-height: 16px;">(Total length: 40 cm - Diameter: 1.40 cm.).
They provide a really powerful attack, either on the toms or snare or the cymbals that's what I like above all. Personally (unlike other reviews) they correspond to an efficient game, and even quite heavy I think (rock in general).
They are durable, anyway (requires painting), the black stands out but does not stain cymbals (it's just not very good at the chopsticks look but do not mind at all ).... especially if you hit the cymbals with the edge and if you put the cymbals at the horizontal like me.
Anyway I'll keep them, it really is the best baguettes I've ever tested!</span>
Did you find this review helpful?yesno
»