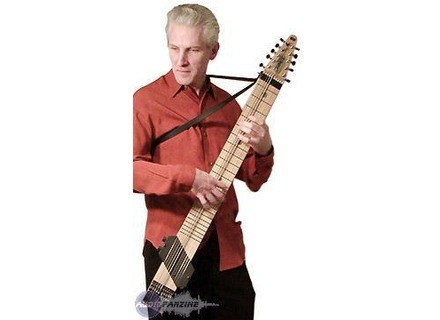 The Stick, Other Plucked Instrument from Stick Inc..

Stick Inc. The Stick
3
This is an interesting percussive instrument. I haven't been able to find too many of these around, and this is the one that I usually see for a relatively cheap price. According to the people I've discussed and my own attempts at playing the pandeiro, I must say that I think this one is pretty good. Many people seem to confuse these things with tambourines. While they look and feel somewhat similar, the pandeiro is cool in that it is far more flexible. For instance, the skin can be tuned in order to produce different pitches, both high and low. Thus, the instrument is capable of a far wider variety of sounds than the tambourine. For instance, Airto Moreira is capable of emulating the sounds of an entire percussion ensemble with a pandeiro.
As far as this brand is concerned, it's OK, but nothing too crazy. The price makes it worthwhile, if you aren't a serious student of the instrument, you might not really want to shell out a ton of bucks for it. This instrument is more than competent to make a good introduction. When Italian percussionist came into the studio where I work, they probably won't be using this, but it's great for the beginners, and it's expensive enough that if you decide to eventually buy a good one, it won't have been too much of an investment. It also gives you enough flexibility with the tuners to understand how to get the different tones out of different parts of the instrument. Other, nicer pandeiros will be capable of delivering more subtly, and will be easier to play to a certain extent. Just to reiterate, this is clearly a beginners instrument. To wrap up, a quick warning; learn how to tune it properly! You could damage it irreparably if you tune it way too tight in my opinion!

over's review (This content has been automatically translated from French)

Stick Inc. The Stick
4
Amricain instrument resembling a guitar electric which would have removed the body and wide handle.
Two sections of rope
The handle is the choice padauk, stocky, Tarara ...
Two volume, tone, output for both indpendante region
The tunings are trs Varis: quad / quads, quads / fifths, "crafty" ... but I personally advise the quad / quads parallles for guitarists wanting to try their luck.

The MODEL I tried n'tait not a great comfort trs; trapezodal profile with protruding edges
This is just the last point which dissuades me from buying it. The highs are bright trs, I got too bright and lacking bass fullness. Although new MODELS intgrent of EMG, offer a wider choice of wood, I find the lack of heat as compared Megatar instruments or Warr guitar. In my opinion the absence of body is one reason.

The Chapman Stick (Tap-guitar is the name gnrique as "Stick" is a trademark) is an instrument cr by Emmet Chapman, a jazz guitarist California. But it is not the inventor of this technique not only to DDIS CRER instruments tapping both hands (eg. Warrguitar, Megatar, AustinDouglas, Bunker, ...). The first player to have dvelopp this technique and initiated changes in the violin is Jimmy Webster in 1950 on a Gretsch. Just a 50aine years, making it an instrument that has yet to evolve young.

Catbasse's review (This content has been automatically translated from French)

Stick Inc. The Stick
4
Disagree !!!!!!!!!!!!! Stickiste since 1991 I find that this instrument is available for any magique.Il confirmed instrumentalist (guitarist, bassist, pianist, percussionist .......) each could develop a technique propre.L electronics is quite simple but in fact what matters more (as with all instruments) is touch and feeling.Son only drawback: its price and the fact that since there are more important in France must pass directly through Stick by the Net Company, and the delays of orders and frabrication long.Mais are quite good that a company that wants to stay craft and if they complain of globalization can not be everything you ever avoir.Si voyer a trainer to try it again this thrill guaranti.Je choice rather than ten times. Hi !!!!!!!!!

Guy Mauffait's review (This content has been automatically translated from French)

Stick Inc. The Stick
Hello everyone. My name is Guy Mauff and plays the Chapman Stick # 1344 (Wood 10 strings), and Chapman Stick # 1040 (Wood 10 strings) It seems interresting to emphasize that I am a composer for Chapman stick (and not Chapman stick with n. 2) and that this musical instrument invented, manufactured and exported by Emmett Chapman, is part of the category: keyboard instrument and not plucked. Arti sticker yours.

Did you find this review helpful?yesno
»
Read the 5 user reviews on the Stick Inc. The Stick »