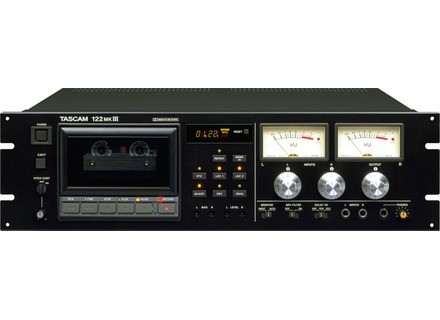 Tascam 122 MkIII
5
This is a cassette recorder with Dolby B, C and HX Pro integrated.

If the legend is Tascam cassette recorders: it is certainly thanks to this model. All other models that followed benefited from technologies of the latter, for sure. This is a classic. It produces a high quality sound rarely heard even to this day. Management exceptional low sounds, even if the use of Dolby B remains at least advisable during your registration. Although it lacks scale (it's still closed), frequencies rarely heard until then we discover.

It lacks the scale? Though: it depends on the type of tape and reduction system used breath. If you use chrome tape (CrO2) or metal instead of saying Normal cassettes and apply through the procedure of setting the bias is much better. But alas, the original tapes of the trade have ever been made with such bands and with such care, just Dolby B was used (and again, not all) and their quality varies considerably in the other: with such a recorder, you can hear it right away.

He just misses the dbx, damage to a recorder of this quality. Well, I know there are reduction units dbx external type 2 (type 1 is for bands) but they have become very difficult to find even used. It's easier to find another recorder with integrated dbx but it will be the basis (that is to say without reducing comparison of breath) not necessarily as good as it ...

It has no automatic bias adjustment end azimuthage nor automatic, but it does not matter. For the first case, it is only useful when recording. In my case, I'll use mine only as a cassette player - finished the time of the tape recording: Now, I record on digital media. For the second case, there are now audio restoration software that corrects virtually the azimuthage, such as the RX Izotop, at least from version 2 Advanced. Fortunately as cassette recorders that have the azimuthage automatic, such as the Nakamichi Dragon, cost to date (late February 2014) used a same fortune.

When we adjust the recording level, the fact that the knob on the other track is driven by whatever you set: this is unfortunately not a proportional adjustment. To do this, nothing better than a knob that adjusts the volume of the two tracks and the second regulates the balance. However, it do very class

)))
- Rackable
- With Dolby B, C and HXPro
- Input-Output RCA and XLR
- Variable speed detachable
- Integrated Oscillator and adjusting the bias
- Counter specified time instead of turn counter Band
- Type Detection Automatic band
- Snooze loop between point A and B
- Memory for 2 locators
- With volume control output connectors on the rear
- Manual adjustment of recording: the left and right sides can be adjusted at the same time despite that rule one potentiometer (but the individual setting is possible).

Weaknesses:
- No dbx
- Not able to use osciateur internal control: something I'm missing?
- No circuit automatic recording level
- Being forced to put a tape to make it work: it complicates the head cleaning, pressing and shuffleboard guides, etc.. So he needed a mandatory cleaning cassette (with mechanism brushes inside)