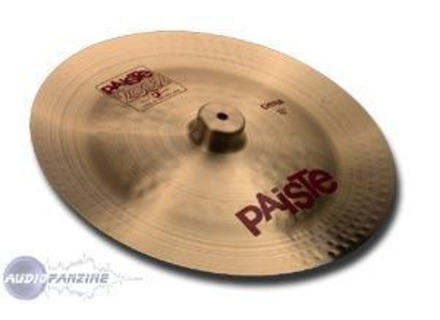 Paiste 2002 China 18''
3
As much as I love the Paiste 2002 line, I am not a big fan of their China cymbals.  These have the other admirable 2002 qualities such as durability or uniqueness. However, as chinas they don't sound great.  The alloy sounds similar to that of the Wuhan Chinas, and the dark orange brown color looks similar.  The production is obviously very different, but I consider the Wuhan Chinas to be better at a much lower price.  Some Chinas are worth the price, such as certain Zildjian K's or Sabian Paragons.  These 2002 Chinas are not worth the price, in my opinion.
<p class="MsoNormal"><span style="font-size: 8pt; line-height: 115%;">
Much of the desirable chnese characteristics are personal preference.  I prefer Chinas that have a deep, gong like trashy explosiveness with a smooth attack and slow decay.  The 2002's have a very intense attack with a short decay.  They tend to be harsh and abrasive rather than smooth.  Some people may prefer this, but I do not.  Surprisingly, I do not find that this cymbal blends well with other 2002's.  It sound out of place regardless of context.

Paiste 2002 China 18''
5
The best china for those who want an IMMEDIATE rponse and Scheer.
This corresponds with cymbal music violent type "mtal".
Did you find this review helpful?yesno

TheUltimateRhum1's review (This content has been automatically translated from French)

Paiste 2002 China 18''
5
1) overall opinion
A Chinese super hyper explosive, rich sound trs almost exotic ... volume trs powerful ... I used this cymbal 2 years (before pter like so many other) All my homies in taient fan, and regret, yet today ....

The least: The price recess even if I found mine was only 1000 F in a shop in liquidation ... Ephmre like all Chinese / crash when playing as a Bourin (we will not remake)

- With the exprience, you do again this choice? ...
Yes I think that one day I'll repay one, but basically I know that there are an even better, exactly the same form but in typical sound, but only the stuff that c are no longer manufactured, it is the china Paiste 18 3000 if one day you find one, take you over!
Did you find this review helpful?yesno
Cookies help us improve performance, enhance user experience and deliver our services. By using our services, you agree to our use of cookies. Find out more.