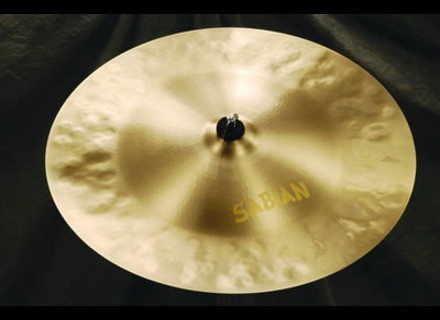 Paragon Chinese 19", China Cymbal from Sabian in the Paragon series.

Sabian Paragon Chinese 19"
5
The 19'' Sabian Paragon China cymbal is without a doubt my favorite china cymbal ever.  It is reasonably affordable and comes from an impressive Niel Peart line of Paragons.  It looks different than many other chinas, with such a deep groove turning flat for the 5'' border.  The edges are very chisseled, producing an uneven appearance.  The sounds it gets are also very special, because it doesn't react like most big chinas.

Rather than having a powerful attack and quick decay, producing the typical pssshhh sound, this is much more gong like.  Depending on where it is struck, it can sound like a deep china or a trashy, gong crash.  I often play it with the bell at the top, not the bottom.  If the center is hit, it produces another amazingly dry and resonant ping that I have only ver heard from this cymbal.  This paragon can be played at low volumes and is responsive, which cannot be said about almost every other china I have encountered.  When need be, it can also be played at incredible volumes and really just blow everything away.

In general, this is receiving a perfect rating because it is what I consider to be the best china cymbal available.  It is versatile, has a specific character about it, and just sounds great.  Too often people but expensive chinas and only find themselves using them once and a while, a highlight here or there.  I guarantee that this china will work its way into your playing more than you expect.  There is another china in the Neil Peart Paragon line, which is an inch larger than this.  It has a totally different structure and sound, so don't confuse the two.  This is the better one, so I say stick to the 19'' and you won't regret it.
Did you find this review helpful?yesno
»