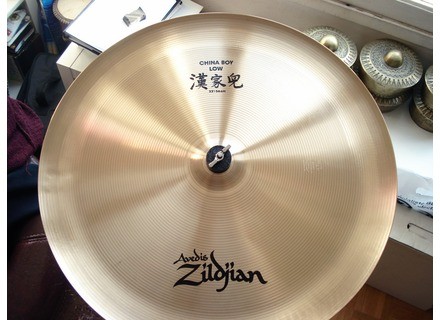 Zildjian Avedis China Low 22"
5
What I like most? Its height, its pronunciation feverish ardor and tropical species. I'm a fan of his warm character and devastating. In fact I continued carefully sound heard on disc since the late 80's without knowing the precise model. I tried two dozen of China since the years and obviously, none had exactly what it wanted. I've had for several years his little sister in size 18 "glossy finish but it did not cover this unique and wide potential (especially in a group situation). However the model in Oriental China Trash 20" is not so far, but even if it seems warmer at first it is actually thinner and brighter and certainly more fragile in the end. In my humble opinion the Swish Knocker is not very far either ... to be confirmed.

My quest ended the day I casually rummaged through the old cymbals used a shop looking for anything specific just to subdue the old models & logos of the previous century. While dozing down the dark The Sleeping Beauty.

Late 2010's Avedis China Boy 20-gauge "does already produce more High and if you see new models in stores or elsewhere you say that it is the end of series. As for the versions Low, the Zildjian Company has already completed for a while the production of 20 ". Regarding the old diameters of 22 "say unequivocally that it is brutally uncommon to encounter in good condition, see unfortunately rare.

Her touch is a bit hard (it depends on the tastes of course) only when it is struck upside down, BUT if you play like sometimes we play the swish that is to say the place as a crash (dome top) you will get a touchdown on the board soft, smooth and warm sound with all the trashy cymbal. But be careful not to hit too hard, you may damage the edges that are fragile on chinas. Anyway no need to try to knock it, it has enough sparkle. Play ride is also a good slice of happiness, but to play with finesse and control because of its volume to its diameter is present. The sound is deep and profound in general compared to his half-sister, the China High Boy. The same effect seems clear and c (r) (h) ssant but harmonics coming out of the china low releases a "wash" demonic and inspiring. The projection is wonderful, because a tad slow to unload everything. It responds strongly with depth. A must-have!
Its dome as shown in the picture is rather small compared to the diameter of the cymbal. This generates a slight dome ping net, fairly clear without overloading harmonic invasive. This diameter dome, somewhat reduces the sustain in general but its diameter of 22 "counterbalances all. It is anything but quiet as a cymbal a lot of (large) China ...
It appears mainly with the remaining elements of the kit but mainly among other instruments. Sometimes that difficult to imagine its true potential isolated from a store!
Compared to its cousin the Swish Knocker, its dome and its edges are shorter. Also facing a lot of Avedis its curve is rather flat, implying a lower tone than average with more harmonics to the key. Musician friends, for this review, I did not pretend to be objective ... this ultra cymbal is my Holy Grail. Desideratum performs = peace in the soul. Good luck with your research.