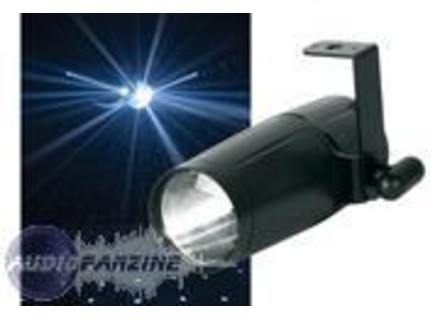 ADJ (American DJ) Pinspot LED
2
Blah, blah, this type of projo does not replace a good PAR 36. I am disappointed by the fact despite a minor power consumption.
Did you find this review helpful?yesno
»

RaphyColmar's review (This content has been automatically translated from French)

The power LED is surprising, with all the advantages of this type of lamp (less fragile, no heater, consumption ridiculous ...) This tiny projector (yes it's something like 5cm in diameter and 15 cm long) easily replace a PAR36. Too bad it does not come with color filters! But there must be a solution (...)

What I like most is the beam power, that it is compact, low conso ...

This is my first "BY" LED, I have chosen for its affordability (the "real" BY LED are almost 2x more expensive) So a Q / P really excellent.

I have not tested in real situations, but I think this choice again in the near future by acquiring a dozen of this "Pinspot LED ADJ" afdin me a ramp.

A buy eyes closed!
Did you find this review helpful?yesno
»

DeeGSA's review (This content has been automatically translated from French)" Ideal for a disco ball!"

ADJ (American DJ) Pinspot LED
4
I use it to replace the traditional PAR 36 30 W for about a year.
It is much smaller, the beam is more powerful and carries forward (6 degree lens), it does not consume nor hot ....

It remains that the 3W but the beam is bright enough: in the dark, you see the beam with almost no fog!

A disco ball, the beams are sent very clear and much more visible than with a conventional PAR. Rikiki size is a more mobile ...

In short, for less than 40 euro is not bad at all!