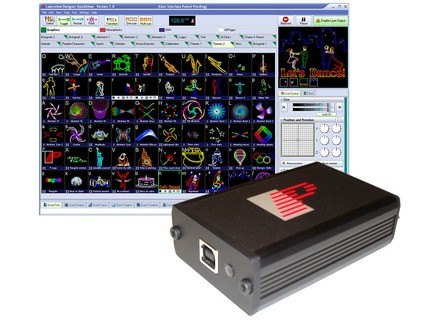 Pangolin Laser Systems Quickshow
3
I use QuickShow and DAC since October 2012, after a year of using a miniILDA.

Already, forcing these two programs have nothing to do, the miniILDA to lighter fare is a software that I would describe as almost amateur its interface was cheap and it was managing the TTL.
QuickShow finds its place in the mid-range of analog software.
The interface is simple to understand, and it is not difficult to play with the projector quickly even without knowing the app.
This app also has a lot of good ideas, but it should not be too much to ask. Banks cues available are already filled, and it is clear that the developers have made sure that the user is somewhat frustrated to have certain features flanged see blocked, prompting switch to Beyond, which is not in the same price!
Examples:
- Good point: the presence of a sequencer (timeline) to create small show rigged a sound track / Bad point: the copy and paste function does not exist, rather galley ...
- Good point: the presence of a pattern generator and simple enough to use / bad point effects the editing function of frames is reduced to the simple, no 3D editors, impossible to make sophisticated animations except one work frame Titan.
- Good point: (.. Ilda, qs, etc ...) ability to import laser effects from many different formats / Bad point: can not export an animation on another extension that QuickShow (. Qs)

Then anecdote technical orde I use for now QuickShow on a Mac I'm running a Windows virtual machine, if other apps running smoothly as Phoenix, QuickShow plant it on a regular and unannounced, due to the Double buffer submitted by programmers. On a native Windows machine, no particular worries.

If from these bad points, the software is complete, the definition of figures and diversity effects are very good, we will say that overall it is a good software if you just use the already programmed effects or make simple programming. If this is really the creativity we are looking for, you would type in the more upscale.

Other categories in Lighting Controllers