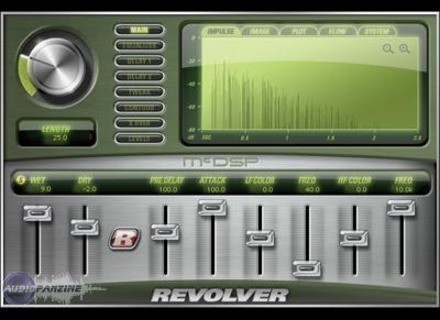 All user reviews for the McDSP Revolver

McDSP Revolver
5
The McDSP Revolver reverb plug-in was quick and easy to install. I bought it electronically as part of the McDSP Project Studio LE bundle, and had it up and running with my iLok within a matter of minutes. I had no compatibility issues with my machine and have had no problems with it since installing it. I don't have a manual for this, and I'm not sure that one even exists - it is not needed as the plug-in is easy to figure out on its own.

I am running the McDSP Revolver reverb plug-in on a Mac Book Pro that has a 2.2 Ghz Intel Core 2 Duo processor and 4 GB of RAM. I use the plug-in in Pro Tools LE 7.4 that runs off of a Digi 002R audio interface. I haven't had any problems running this plug-in with this configuration, as it has always run smoothly. I have never run more than one of these at once because I put it on an auxiliary track and send the signal from the tracks via buses. This saves processing power and I do it with all reverbs and delays. This being said, I don't think you would have too much trouble running a few of these at once if you wanted, but it really depends on what kind of machine you are running this on.

I've been using the McDSP Revolver reverb plug-in for about six months. The plug-in is easy to use and has some great sounding reverb and delay effects. It has a lot of parameters that make it capable of getting a variety of different sounds, and being that I bought the plug-in in a bundle, it was dirt cheap. I love the sounds I get from this plug-in and I highly recommend it for all digital audio workspaces. McDSP makes some great plug-ins for extremely reasonable prices and would recommend looking into the Project Studio LE bundle as a whole.
Did you find this review helpful?yesno
Cookies help us improve performance, enhance user experience and deliver our services. By using our services, you agree to our use of cookies. Find out more.