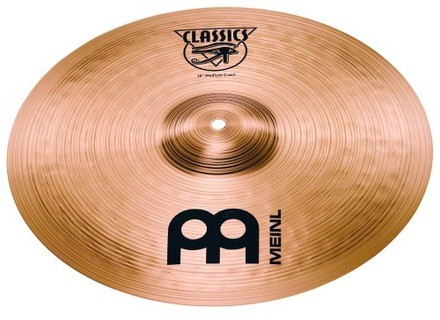 Meinl Classics Traditional Medium Crash 16"
3
I bought "this unit" at Drumcenter in Borlänge, Sweden. The store is actually the biggest one in north of Europe, pretty amazing for being situated in a town with approximetaly 50 000 inhabitants in AND around it. I payed 995 SEK, which is about $95.

The Meinl Classics symbals are great stuff for players that are known as "begginers/hobbyists". The thing that really differs from other cymbals in this price range, and I have compared this to Paiste 802, Sabian B8 and Zildjian ZBT, is that it is actually made from cast bronze.
Sabian B8 and Zildjian ZBT are made from large sheets of bronzed from which the cymbal is stamped out of. This makes the cymbal both sound bad and not very durable. But to a lower price.
Actually this cymbal costs less than the above described series. I think this is a wonderful oppurtunity for hobbyists and beginners with empty wallets!


The sound is not very much to be amazed about. Low volume and fast decay makes it sound cheap. I tried to play it with rods, hoping that it would be better fit for softer music and volume levels, which proved to be wrong. The cymbal did hardly even react on the softer hits and when striking harder it did just sound like it did when hitting it with sticks, but at a lower volume level. No "levels" at all.
The same thing was for when playing it with sticks, there was just to levels. Either it was nothing at all, or there was a regular crash. Still, it is a good cymbal for beginners.


The Classics-series are produced like higher qualityb range cymbals, by cast bronze. Though it consists of a less durable and well-sounding bronze alloy than "better" cymbals. This generally makes the cymbal sound and be more durable than for example Sabian B8 and Zildjian ZBT, though.

A good choice for anyone who is a beginner or hobby-drummer that just need something to play. Also works for homerecordings and small gigs, preferably for a beginning band. I would recommend this to anyone who fits the description, but anyone who is looking for a good cymbal should buy Paiste 2002!
Meinl Classics gets 3 points, since it is a good and cheap beginners cymbal.