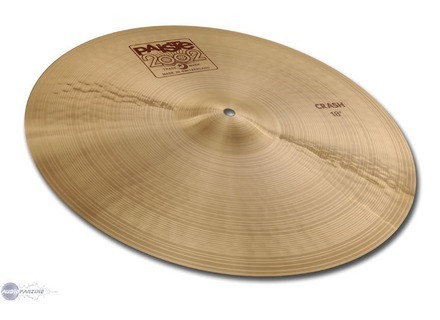 Paiste 2002 Crash 18"
4
I owned my Paiste 2002 18&quot; crash for a couple of years before sadly parting with it. I like the lower overtones and the deep wash it gave me, which were mostly due to its 18&quot; size. I started to stray away from smaller crashes and splashes due to the weak wash or sustain and harsh high frequencies, and ended up playing only a 18&quot; crash and 22&quot; ride form Paiste's 2002 series. The two cymbals blended perfectly together for playing in an heavy hitting indie rock band.
I like the finish on the 2002, its not very brilliant but it held up really well for years even though I was constantly setting up and breaking down my set, and never even wiped the cymbals down from hand oils and fingerprints. This had ruined the finish and even dulled the sound on a Sabian AAX crash I had previously.
Another thing I liked about this cymbal, was that it was fairly loud, not in a harsh way like the RUDE series but in a way that filled a room and still cut through a band. I would say that the entire 2002 series is probably sonically somewhere between the RUDE series and the ultra expensive Signature series. They have a bit of the power, projection, and volume of the RUDE series, though more musical and sensitive like the Signatures. They lack some of the complexity and refined tone of the Signatures though, to be a more powerful cymbal that would stand up better for heavier rock music.
My 18&quot; crash proved very durable as it served me in playing heavy rock music. My technique involves setting the cymbals low and flat and being struck most on the edges instead of the face, so the edges received a lot of abuse from the sticks wihtout ever being dinged, dented, or warped. I think it has a lot to do with the thickness of the cymbal, and yet again is another reason why I was better off with 2002's than Signatures which can veer to the thinner side.
My Paiste cymbals were the most expensive cymbals I had ever bought, but I had become disatisfied with zildjians sound, and Sabian's quality of anything below the Hand-Hammered line which was too pricey for me. I believe I paid almost $170 for the 18&quot; crash, more than I had ever paid for a crash, but still more affordable than had I bought Sabian Hand Hammered or Paiste Signature.
If I had to buy another setup all over again, I would try and buy Paiste Signatures if I could afford it because I would enjoy the complexity and brilliance, but for what I was playing when I owned the 2002's- they were perfect. I followed good adivce from fellow drummers in the same style of music, and played a ton of cymbals before buying them, and they stood up to the abuse I gave them.
Did you find this review helpful?yesno
»

farandole's review (This content has been automatically translated from French)

Paiste 2002 Crash 18"
5
I use it for 1 year, it's definitely a rock, PRCI and powerful. trs good report quality price, with the experiance I would do without hsitation the same choice!
I is not 10 because perfection is not of this world!
Did you find this review helpful?yesno
»

IroncobrA's review (This content has been automatically translated from French)

Paiste 2002 Crash 18"
5
Well I have the thin crash 18 "(I paid € 200) I am not an expert to describe the sound of a cymbal, but I'll try ...
The sound is rich, powerful enough and serious enough strength levels ... I can not say because I did that for about 2 months ...
Anyway I play metal and stuff a little more funky and I still took a while thin because I think the sound is more beautiful than the crash that the thick sustain is longer and the hit is more pleasant ...
In addition there little rider (with olive baguette) and the sound is pretty mushy, but the ping is audible.
And for those who knock on the wrong with their crash, and although it sounds from hell ..
In short all that to say that I am in love with this cymbal I think his sound is just beautiful ... I am by no means disappointed!
I am Fan!
Did you find this review helpful?yesno
»