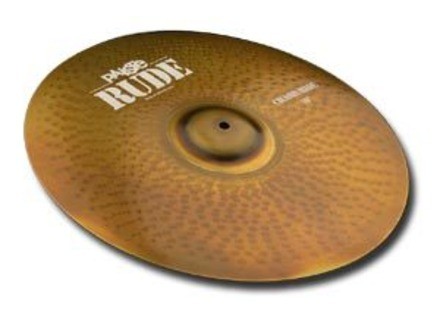 Rude Crash/Ride 19'', Crash Cymbal from Paiste in the Rude series.

batterie76's review (This content has been automatically translated from French)

Paiste Rude Crash/Ride 19''
5
Saloute drummers friends (his)
- How long have you use it? About a year and a half
- What is the particular feature you like best and least? I think what I like most about this cymbal is the sound (it's good for a cymbal ...); because it's a hot trs trs (who said too much?. ..) when you hit the cymbal with good horizontal or inclined lgrement and my "little" 10 years of exprience with some drum cymbals as sries supposedly "dangerous" and "z custom "of zildjian or" AA Metal X "sabian among other things, well I can tell you that this is the only rsiste by far, attention I must admit that is a paiste crash / ride more logically rsistante however I think that even a very thin crash with severe (see notice posted by another friend, drummer on this site), "exploded" the two cites SERIES prcdemment Voil done and I'll add (dsol. ..) at the cost of stuff and especially the drum cymbals (see how fast the "metallic" I am one, explosives) I think I I do my best qu'aiguiller "ERRF" or "sisters" drummer (his) re_voilbr /> Oh bah just the lowest price but the quality is paid for and by the weight of the cymbal (s Entire series I think) jazz music or "soft" are not recommended hlas with this cymbal
- Have you tried many other models before acqurir? Oh yes too! Zidjian (Z custom series and z normal I think), Sabian (AAX, AA Metal-X), Meinl MB10 (a real crap! Not at all rsistante same for anything other than the mtal, I doubt its capacity)
- How do you report qualitprix? Good
- With the exprience, you do again this choice? ... I think so or not hsitation limit plutt I will choose a hard crash in thin because I have a really good ride sabian AAX so the crash / ride hard 19 "is big and ... bah break many sticks right? lol good luck going the community "batteuristique"
Did you find this review helpful?yesno
»

Paiste Rude Crash/Ride 19''
5
HOW LONG YOU USE IT?
It's been a little less than a year since I use it

YOU'VE TRIED MANY OTHER MODELS PRIOR TO PURCHASE?
No I have not tried other models before I just started with a kit paiste 101 product by the mark "FAME" and I knew that in the future I would take 2002 or paiste rude .. there's no per PHOTOS contribution to other brands that say "METAL".

WHAT IS THE PARTICULAR THAT YOU LIKE THE MOST, THE LEAST?
For more: I love everything I have nothing to say its power is cut metal explosiveness to play metal.

To say the least: They are not bright enough in my opinion I think paiste should highlight this series with a more polished as they come to with the ALPHA series has therefore not really a less is more a personal opinion.

HOW YOU FEEL THE VALUE FOR MONEY?
If you want to compare the price with nine of the cymbals sabian metal-x and other crap, do not disappoint payste for 280 € you will have the quality in every way, mine I zi pzyé OCCAZ of € 120 and the sound is always there when she dates back 80, you think.

EXPERIENCE WITH THIS CHOICE YOU do again?
Yes I never take anything other than paiste 2002 "Rude"
I listened to the sound of staag "FURIA" on a site is the sound was not too bad should I buy this kit one day.
Did you find this review helpful?yesno
»