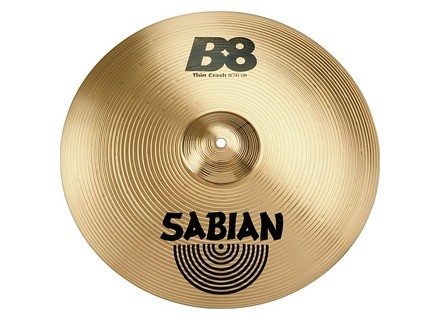 B8 Thin Crash 16", Crash Cymbal from Sabian in the B8 series.

Krystal's review (This content has been automatically translated from French)

Sabian B8 Thin Crash 16"
1
J uses the "cymbals" for 2 years .... The price prstige but especially the brand caught my eye but I trs soon regret the cymbals did no power, sound very difficult out there and be hit like a mule in order to avoid the sound "bowl" (for a thundering "thin" ...) and the sustain and ....( more pathetic for a thundering 16 inches), I have replaced by a paiste 502, 14 inches, which sounds 10 times better for half the price! The ratio quality / price n is not even good cymbals ..... frankly this n 'is really nothing to it ....
Did you find this review helpful?yesno
»

serialdrummer sphere's review (This content has been automatically translated from French)

Sabian B8 Thin Crash 16"
1
I agree with the advice Previous b8 crash are almost unplayable, but the wrinkles and hh are trs good for the price but normal version because in the hh rock is too hard and not all versatile and ride is much worse in rock version even when I speak not so rock version crashes in the pack ride hh b8 crash is not the business of the century.
Did you find this review helpful?yesno
»

Brebz's review (This content has been automatically translated from French)

Sabian B8 Thin Crash 16"
2
This has no cymbal sustain, and no potatoes, and this may well be the low end, the 402 is much better and cheaper, it can be qualities of playing acoustic but it's a good hardcore zero, a pet fly the saturated ...
Did you find this review helpful?yesno
»

blizzar's review (This content has been automatically translated from French)

Sabian B8 Thin Crash 16"
4
I agree with the opinions Previous by a small detail is that the cymbals is certainly not for a hard style but it still is doing not too bad if used as a crash secondary and that the goal is not to get excited about his cymbals but given just a small accent that does it all.
in short, I recently purchased and I do not like following her mcontent, but is needed is a good first cymbal is much instantly.
Did you find this review helpful?yesno
»