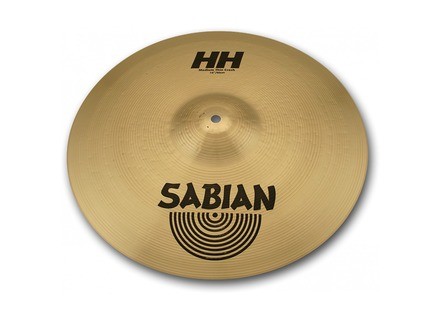 damon77's review (This content has been automatically translated from French)

Sabian HH Medium Thin Crash 16"
5
Just like a, in the REFERENCE 11607 sabian crash cymbal is set in the inventory of Phil Collins, just to put this product as good as recognized as a REFERENCE in the range of manufacturer with at least one of the greatest drummers in a professional style prcis. Personally, I want and I will have! The sound is fun and know-how Sabian is the appointment, is a cymbal that will never be the same as its twin in terms of sound, there always have a coach that gives trslger his personality each of these beautiful. I do not know you, but I saw what I want to play, I can not do without some cymbals with it! That the pace be with you ...
Did you find this review helpful?yesno
»

coppa's review (This content has been automatically translated from French)

Sabian HH Medium Thin Crash 16"
5
I have jou for 2 years and I sold the complete set, what a mistake. trs are musical it is a pleasure to play. they made me shiver. they may explode or sing softly in any case it's just nice, enjoyable ear. c'tait so again, I would do the same, by the way I watch occasions.
careful they are thin, and I crack me dfoulant 2, a thin crash 16 and 16 sound conrol. to make them explode they must whips or they will eventually break and if they are no longer under warranty, you will regret. by the way, thank you camac them to me repeatedly as collateral. 11 of 10 for the sav
Did you find this review helpful?yesno
»

Menclay_703's review (This content has been automatically translated from French)

Sabian HH Medium Thin Crash 16"
5
I DCID 6 months ago to buy the cymbals worthy of the name, in fact I am beginners and the only cymbals I possdais taient of toilets available with my drumkit! so I took a ride to AA before m'intresser crashes. L I had a choice and I took the time to test a lot of cymbals. I DCID to take everything into high-end leaves break the wallet but have a solid set cohrent. And as such I am really happy with my trs trs crash HH 16 '!

It's a refined trs also some drummers express pulled out their hair when they saw that I was playing so good on cymbals! =]. This is not to nag a cymbal, so I use it just to punctuate a break. It's an enjoyable trs, I can not because I do not dcrire vocabulary adquate, I would say basically it's just a hot, hot, and is pleased t serious. I do not regret my purchase, however I took a Splash in the same SERIES complter for, and it sounds really good trs trs!

For one thing cons: pamper them. Mtalleux refrain handled with dlicatesse because it is quite thin and deprive themselves of the same would be damaging trs!

metabatteur's review (This content has been automatically translated from French)

Sabian HH Medium Thin Crash 16"
3
I have this cymbal for 1 year. I had bought second hand.
I love her very accurate and very hot, hotter than HHX but less accurate, however. What I love is that it is super thin but solid.

I tried K of A. I decided for this one because of the price (in time ...)
Nine value for money is good, but if you will, there's more.

Look at the MEINL UFIP in Byzantium and there are very nice cymbals for cheap.
I do not think I will have bought new, but secondhand go ahead it's solid!
Addition September 2007: the appearance of a small crack ... So finally the strength was not so good. Anyway, it lasted much shorter than my Meinl Byzance when I hit them the same way.
Did you find this review helpful?yesno
»