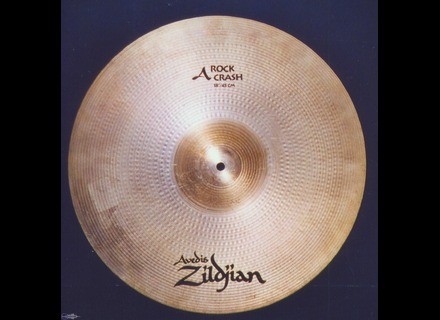 A Rock Crash 18'', Crash Cymbal from Zildjian in the A series.

View all offers for Zildjian A Rock Crash 18'' »

Nimajneb's review (This content has been automatically translated from French)

It's a cymbal rather thick, very strong, very powerful! I play in situations in Crash "supported" in & Crash / Ride at low volume!

As often in the series Avedis, the sound is rather "boilerplate". Still, it took me a while to "place" in my game (probably because of the volume it requires ....)!

Being "dropped" on a model used really interesting, I have been trying without much special attention to the sound, but rather by trust in this prestigious series Zildjian ... Finally, I love this cymbal!

It does not have a central place in my game, but it's still there when I want an accent mark "particles" at any volume of play, or to be played in a Ride with "Ping" a bit muffled compared Ride a real ...

Neuve, preferring the series for A Custom crash, I would have probably never chosen, but, in retrospect, I am very happy to be "dropped" on it, especially since it is not ready to let me go see robust ...
Did you find this review helpful?yesno
»