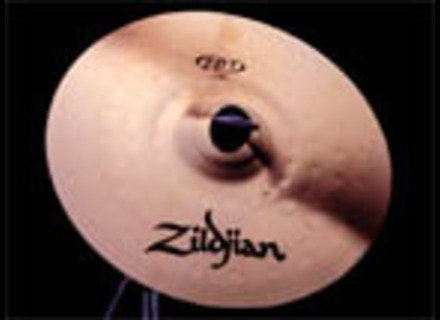 ZBT Crash 16'', Crash Cymbal from Zildjian in the ZBT series.

Zildjian ZBT Crash 16''
4
Zildjian's ZBT Crash 16" is a pretty standard sized crash cymbal for your drum kit. It's definitely on the lower end of things as far as crash cymbals from Zildjian go, as they have cymbals for players on all levels and all budgets. I recently played a drum set at a friend's house who had a kit with mostly ZBT cymbals, including this 16" crash. While I've certainly recorded with a ton of better crash cymbals before, the ZBT 16" Crash isn't terrible for the price. It's about as cheap as you'll find a decent crash cymbal, and while you can always get better cymbals, I think that if you go any lower than this that you're going to be getting something pretty poor. At least with the Zildjian's ZBT Crash 16", it sounds like a crash cymbal and would be suited just fine for practicing and even for shows. I wouldn't record with it unless it's all you got as it's simply not up to snuff for making any sort of professional drum set recording. Having said this, it's perfect for new drummers and even a bit more experienced ones who are looking for a decent enough crash cymbal to work with without having to spend much money at all. It's not dirt cheap new, but if you were to get one used it probably would be. I wouldn't recommend the Zildjian's ZBT Crash 16" for any professional drummers or even more experienced drummers, but for those are just breaking into the world of drum sets and crash cymbals, it's going to do a good job at a cheap price. Again, you can go cheaper, but anything cheaper is most likely going to be pretty poor sounding. I wouldn't over or underestimate it, as it is what it is - a decent starter to intermediate crash cymbal...
Did you find this review helpful?yesno
»

Zildjian ZBT Crash 16''
3
I had one of the 16” Zildjian ZBT cymbals when I first started playing drums and at the time it was good. The sound of these are actually half way decent. The cymbal holds a full tone for a nice amount of sustain, it has a nice ring, and holds a little bit of character. The ringing crash would have to be the best part of this cymbal. The tone is fully intact with such a low price tag. The ZHT’s ,however, hold a much brighter and melodic tone, perfect for anything from metal to pop.

The main issue with the ZBT’s is their lack of durability and the descent of tone as you play them for longer and longer. I only had mine about 5 months when it got a hairline crack. The cymbal eventually got destroyed and now has an industrial sound which is actually pretty awesome sounding. Although the sound was alright once cracked, the cymbal was not very durable compared to the cast lines like the ZHT’s, which produce a much better tone, and the ZXT’s, which have way more volume and power.

Overall, this is a beginner’s cymbal with a cheap price tag and a decent sound. It has just enough tone to be better than planet Z’s, which are horrible compared to these, but not durable enough to stand up to heavy hitting for a long time. These cymbals would be much better without the weakness of the cymbal. I used ZHT’s before this, but have since switched to the more durable and better sounding cast Zildjian cymbals. Even though they do not stand up to the cast cymbals, the ZHT’s are the closest thing to professional sound on a budget. If I were to have to buy a sheet cymbal again, I would make it the ZHT’s instead of the ZBT’s.
Did you find this review helpful?yesno
»

diGo's review (This content has been automatically translated from French)" Very decent and cheap!"

Zildjian ZBT Crash 16''
3
Originally, I had the ZBT Rock Crash 16'' but a drummer friend has borrowed me and BIM! he split; balèze because I had put him in a lot and she never moved ... Good at the same time it does not surprise me, it splits all crashes ... In short, I was happy and I replaced it with a ZBT Crash 16'' (exit the 'rock').

I remember being a little disappointed with the sound compared to the other but slightly less aggressive side of this crash was also attracted me. It was at this time that I noticed that my set was 'rock' and there could be other ZBT not 'rock'.

So, since I use and I've put him in the face. She never flinched, not a crack, it's solid! Obviously, a repeat with my friend and it is split but hey, crack cymbals, is also a form of art right?

If you do not have money and want a cymbal that does not sound pan, take it! if you want it a little hard mouth of your guitar playing too hard, then take the 'rock'! If you crack into a repeat, be nice, do not make the competition buddy artist 'switch instruments ...
Did you find this review helpful?yesno
»

mat50's review (This content has been automatically translated from French)

Trs sound clear, but who knows how to nanmoins entendre.Une trs cymbal sound passing through a lot of style. Its only small default and sustain can be a little too long.
I did not try before you buy is a gift (even when prlablement chooses).
The report remains all the same qualitprix trs good, and it ziljian c'st of the solid and is plutt Zolie ...

If I had the choice again, I think j'hsiterais srieusement with the brand that offers meinl I think also of good quality cymbals with a report qualitprix unbeatable ....
Did you find this review helpful?yesno
»
Read the 7 user reviews on the Zildjian ZBT Crash 16'' »