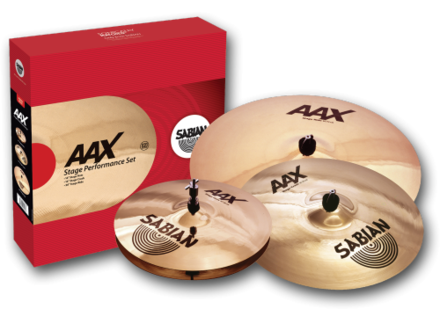 Sabian AAX Stage Performance Set
4
After not playing for a few years, I decided I wanted to get back into it so I purchased a new kit for which I needed cymbals with. I did't want to buy peice by peice or used after I saw the performance sets available. Having also been told that the foundation of your cymbals have been matched by sound for you was aperfect idea. Between HHX and AAX I chose AAX when I mentioned to the salesguy that I played hard and soft, he recommended AAX which were actualy cheaper in price. I figured buying in bulk was going to be cheaper and it was.

The versitility behind these cymbals are endless.I like how they blend rather than overpower.They offer a great blend of tones
with brightness and clarity. Most of all what I like is that they are very easy to control and are sensitive to hard or soft playing and sound amazing either way. The brilliant finish on them are very attractive and captivating.

There's nothing I don't really dislike about them other than the sizes which are only based on preference anyway. I would have prefered a 21" ride instead of 20" and,an 18" crash instead of a 16".

The lathing appears fairly simple like two groove patterns. one is a straight circular
lathing and the second angleling itself
outward to project it's tone. Also very dull hammerings fairly cimetricly placed. They apper to be machine hammered but sound like they have been hand hammered, especialy the AAX Dark Crash which is the only AAX I beleive to not be available in in a brilliant finish. These cymbals are cast made from durable SABIAN B20 Bronze unlike the lower lines of SABIAN cymbals such as B8 Pro which are made with B8 Rolled Bronze and are much cheaper in price, but also in sound. HH, HHX, AA, AAX are all the best series of SABIAN cymbals.
Durable stuff that delivers great results everytime.

A practical buy worth every cent and more.
I recommend drummers of any style to try them. If versitility is your thing AAX Stage is a godsend.

The Sabian AAX Performance Set is visually stunning to look at. With it's exclusive Auto-Focus Response feature filtering out unwanted overtones and equalizing high and low ptch responses for a perfectly bright tonal blend, these cymbals deliver the purest, most controlled sounds at any level of volume.

These cymbals Have little or no fault. I personally think that the bow of the ride cymbal could be more defined when hit.

At the price for these exceptional cymbals, they will last for many years, and will not need changing. They will make jaws drop with their fantastic liquid shine look and sound wise these cymbals are soem of the best money can buy.

sturdy case for safety, visually stunning, brilliant sound, affordable and worth every penny.

Sabian AAX Stage Performance Set
5
I got a greatdeal from Sound Attack in Colchester, UK.They matched a price that I had been quoted elsewhere. I paid £325 for the performance set which includes 14" Stage Hats, 16" Stage Crash and 20" Stage Ride. The set comes in a hard black plastic moulded cymbal case with centre bolt. This is my first serious cymbal set. I have always used lower grade second hand cymbals before as that is all I could afford at the time.

These cymbals really are superb. The sounds are clear, bright and strong. They cut through live on stage without mikingm and they sound excellent in the studio. They are Briliant finish and look stunning under stage lights. The casethat came with them is fantastic. It has a screw on centre bolt to hold the cymbals in place and I know that my cymbals are safe in transit.

It's hard to find fault with these cymbals. My only comment and this is purley a personal view, is that the 20" ride could have slightly more stick definition and less wash. This is easily solved by changing to a metal or Rock Ride, which is what I will do at some point. The fact is that this is a good all round ride and does'nt let me down at all.

These are good strong cymals that are built to last a life time. If they are looked after there is no reason to replace them which is another reason why I paid out for a good set of professional cymbals. The case is very sturdy and makes the whole deal a very good one.

Great set of cymbals to suit all types of music. They sound great whether played loud of softly. A really professonal sound within reach of a working drummer. I intend to stay with AAX and build on my set. I am really delighted with this product. Well done Sabian!!! in my opinion they are as good as A Customs!If you live in the UK and need a set of cymbals, give the guys at Sound Attack a call and sort yourself out with some Sabian AAX.

Sabian AAX Stage Performance Set
5
I use it since April 2009.

I have tried many models, not necessarily in the same range.
I was looking for a set of Zildjian cymbals to replace my ZXT.

No negative points.
The cymbals are sold in a "pack harmonic" and here means. The sound is very easy to master for each of them and it's a real pleasure to play on.
Moreover, it is very strong.

The price is justified for material of this quality.

I would do this choice with your eyes closed.
Did you find this review helpful?yesno
»
Read the 5 user reviews on the Sabian AAX Stage Performance Set »