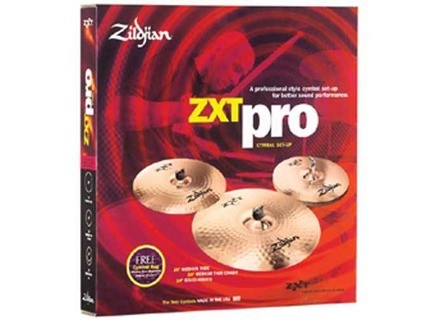 IroncobrA's review (This content has been automatically translated from French)

Zildjian ZXT Pro Box Set
3
I got this set two years ago, at first I was very happy ...
I broke a thin crash in the space of just a few months after renplacer free ... I have the new recassé almost as fast as the first ...
Apart from that the sound of the ride is not very pleasant to hear but when you play it becomes almost audible.
The Hi Hat is not bad, it's pretty accurate. I think this is the best cymbal of this pack (and I said of this pack!).
After I added a china 14 "it sounded good! She was aggressive but still" a little "(" "= a little more than a few) metal.
Then a splash 8 ". For against her has not really fault it is very good.
Well after I realized that I had been ripped off (even if it was a gift from Father Christmas is expected by the way give me a little in December 2002) because I still get paid 500 €!
So I think at this price there can be 2 times better ... Although they have still some qualities, I do not advise anyone!
Did you find this review helpful?yesno
»

Ebony drums's review (This content has been automatically translated from French)

Zildjian ZXT Pro Box Set
4
Well, I just reread the post I believe that there is a little more than a year now, and I realize that I trssvre t! Especially when we are beginners, this set is good trs.

I remember the very first time I tap on the Hi-Hat (replaceable my Hi-Hat Pearl) I had chills ^ ^!

The prices dropped about 330 today, this pack now benefitted from a good qualitprix.
I now have some good quality cymbals (2 crashes Thin: a Paiste Rude 17 "and a 2002 18") and I find that my ZXT do not marry too bad with them.
Did you find this review helpful?yesno
»

humhumhum's review (This content has been automatically translated from French)

Zildjian ZXT Pro Box Set
3
These are my first cymbals, so I have 3 years. We had sold them to me and told me it was good, and the drumkit is first super good also, I am not too posed quesstions.

Register-level, I play mostly jazz, and there, the ride-for me-can only be exploited on the dome (which is good), even gently tap elsewhere on the cymbal and it sounds far too long!

The crash is my favorite, used crash or ride, the sounds are more varied and ok.

The charley is very heavy I think, it goes but I like it too much.

FOr the rock, all going better, that's normal.

So in short, well-c at first, but as soon as you begin to rummage, to search for sounds -> bof.

NB: I tried few other cymbals, so c purely subjective and not as a comparative view.
Did you find this review helpful?yesno
»