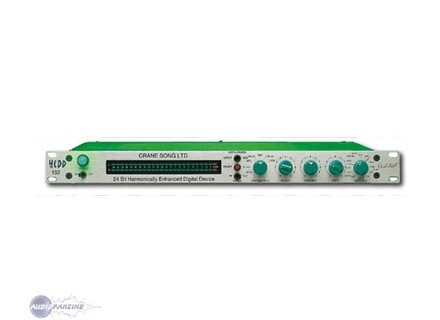 Crane Song Hedd 192
5
converter 2 channels dedicated to high quality installation of your mixes or mastering
24 bits up to 192 kHz
dither 16 and 20 bit
Analog I / O, AES, SPDIF
a large bargraph for accurate visualization
especially three circuit simulators which made its reputation

conversion very pleasant and intelligent choice simulators to the place where you wish the AD or DA or DD between two machines!
the three simulations are:
- Triodes: slightly grainy saturation, for use on very old soul mix eg
- Pentodes: less saturation but beautiful harmonic generation, wider, perfect on almost everything
- And finally "tape": a beautiful tape emulation, with a nice low compression and a slight softening of the rest

lm's review (This content has been automatically translated from French)

It's been a week since I work with, but I do not see why my opinion would change in the coming months.
Most:
Fidler the restitution of the original signal either in mode A / D or D / A
The quality of Harmonic Medical Treatments (triode, pentode, tape). Some combinations given me enough about the results to their work at the same pre-mastering.
The sparing of the machine: 25 watts, relatively little heat.
The quality of manufacture (including knobs and switches)

I did some A / B comparisons with various converters: Hedda 192, Mytek 96K, Creamware A16, my Roland VS2400 (which ultimately did not so bad as a. ..).
My clear sense is that the Mytek HEDDA and are quite close in terms of Fidler. The A16 really trs as below acceptable Roland and nothing more.
The advantage of HEDDA as having more of a quality conversion and restoration irrprochables, the possibility of Trat Generation of all the harmonics of the signal.

Crane Song Hedd 192
5
* What are the proposed conversions?
NA, NA, all frequencies in all resolutions
(Which formats: 16/20/24 bit, 44, and at 192khz
and what the meaning of conversion in all directions as inputs into output, and
* What is the connection? Anoligique XLR, SPDIF, AES / EBU
What type of converter is used (if A / D or D / A)?
Crystal Semiconductor converters

In addition to being a high-end AD / DA converter the Hedd is an emulator of "his" band or lamps, harmonic generator (triode, pentode, tape).
To be used sparingly and sensitively.
When we try we want to put across ...
Manufacture very serious

* For how long have you been using it?
4years
* What thing do you like most/least about it?
To convert the input or output at different frequencies
Able to apply the tape emulation and other harmonics, the signal digital or analog input or output
* Did you try many other models before getting this one?
not
* What is your opinion about the value for the price? Very good although when we finally made the check, a drop of sweat runs down his forehead!
* Knowing what you know now, would you make the same choice?
Eyes closed and yes, ears wide open!