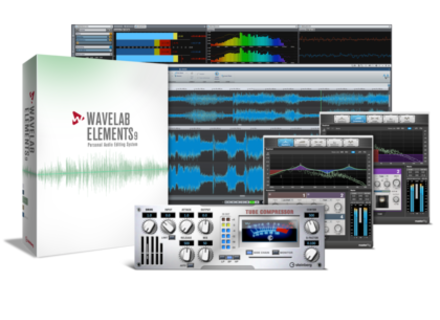 Steinberg has announced version 9 of its audio editor Wavelab, with two different (Pro and Elements) versions.

WaveLab 9 features a new single-window interface based on a "ribbon and tabs" concept, as well as a multi-monitor-friendly window docking system.

The Pro version's Master section now offers 12 insert slots (5 in the Elements version) with flexible channel processing and new metering/monitoring, plus M/S support. Included mastering plugins are combined in the MasterRig suite, described as "the most powerful plug-in suite ever developed by Steinberg". A total six multiband modules are included in WaveLab Pro 9 (Imager, Limiter, Dynamic EQ, Compressor, EQ and Saturator), while in Elements 9 the MasterRig included the EQ, Compressor, Limiter, Saturator and Imager modules. WaveLab Pro 9 also contains two new multiband plug-ins, the Multiband Expander and Multiband Envelope Shaper, and in addition to these a new SoX-based Resampler has been included.

Version 9 also introduces a new direct file exchange system to help WaveLab work alongside Cubase and/or Nuendo, with the additional possibility to open WaveLab directly from within Cubase/Nuendo to use WaveLab’s restoration, editing, analysis and mastering functions during the mixing process. After editing and processing the audio file in WaveLab, the file can then be automatically updated in Cubase/Nuendo with a single mouse click in WaveLab.

Owners of a previous version who registered on or after February 2nd, 2016 can benefit from Steinberg's traditional grace period.

More details at www.steinberg.net, or in the following videos: