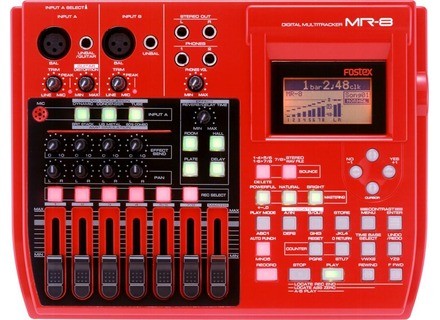 Fostex MR-8
4
I purchased my mr-8 at a houston guitar center for $230 used after a lot of loking around for the best price. I needed good quality, cheap recording gear for my demo fast, and the mr-8 seemed to deliever in all of the reviews i read on it.

I absolutely love the ease of use. I was able to record as soon as i got my compact flash card (a 128MB card comes with a new unit for storage, but i bought a 512 MB compact flash card because i heard the 128 wasnt enough space. Plus, since i bought mine used, it didn't come with a card) It works hand in had with my computer, all i needed was a regular USB cord, the software for tranfering tracks straight from the fostex website, and a demo of Adobe Audition 1.5 (30 day trial) for mixing which by the way is awesome. I got very professional sounding recordings. It's a good idea to invest in a seperate mixer to hookup to the mr-8 so that you can feed in more than 2 mics at a time and have more control over the sound than you would have with just the unit itself. For my demo, i used a berhinger because they tend to have decent quality gear for a fraction of other brands equipment. The mastering effects on the mr8 are pretty admirable for the low price.

You MUST look at the list off of the fostex website to make sure you're buying a good compact flash card (if you chose to buy one with more storage, which would be smart)that is compatable with the mr8 because not all of them are. There's a built in mic on the unit, but it's smart to hook in your own mic. I personally use audio technica for my budget.

I've dropped it.... more than once to say the least from tripping over cords and what not, and it's held up just fine. The quality is great, i couldnt aske for more.

I love my unit and even if i could afford it right now, i don't believe i'd be purchasing a bigger unit simply because of the ease of use and portability of the mr8. It uses batteries for added portability if it so suits you which was an attribute that i really liked. The sky's the limit on this powerful little machine and my home recordings have reached CD quality level because of this unit.

Fostex MR-8
4
I bought the MR-8 from Musicians friend in a package deal that included headphones, a mic and cable, and gig bag for 350$.

This unit is great for rough mixes. It is compact and very user friendly. Its easy to set different points in a song as reference points so you dont have to search all day long to find a certain point in a song you are working on. Its also nice if you want to go somewhere (like out in the woods) because it can run on batteries and has a built in mic. Mastering effects and reverb are decent. I play many instruments including guitar, mandolin, banjo, bass guitar, didgeridoo, jaw harp, keyboards and various types of flutes. All come through fairly decent with the MR-8.

The included flash card is way to small for just about anything. This recorder is really only good if you have a decent computer to hook it up to. I use Cakewalk studio pro and bounce back and forth between the two so the card isnt an issue for me. If you dont have that option you will definately need a bigger flash card. With 8 tracks(you have to bounce tracks 1-4 to track 5, then record 1-4 again to get all 8 tracks) you are looking at a 3 minute song and no more. The guitar distortion sucks unless you want a very digital sound, then its OK.

I've had this unit for about 6 months and have had no problems. It seems to be well constructed for its price.

The best way that I have found to get a (close) professional sound is to mike all your instruments or amps and go from there. I also do vocals by running my mic to my PA then using the line out to the recorder. This is a great recorder for the price or for use as a scratch pad. But getting high quality recordings although possible, requires some work.

Fostex MR-8
4
Purchased at Sam Ash music store in King of Prussia for about $350 and a separate 512k Compact-Flash card for about $150. Bought to do some simple home recording including drums, keyboards, bass, guitar and vocals. The price for this unit is exceptional.

Price is great for the unit and the built in effects are very good. Easy to operate for someone who is not technically very proficient. Digital recording is so much easier than the old cassette types I used to use in many ways including ability to cut and paste and find your spot. Also, the interface with the computer is very easy making it simple to burn CDs. I also liked the fact that I was able to take all my old cassettes and convert them to .wav files with this unit, hook it up to my computer and burn CDs of my old tapes. USB connection to computer works great.

I was disappointed that it is billed as an 8 track when to get 8 tracks, you have to first record 4 tracks and then bounce them (and submix) to track 5 and then record tracks 1-4 again. You then mix tracks 1-4 plus 5 together onto track 6 to get all 8 tracks. Also, there is really no way to have two different effects.

Well built and portable. Easy to move from basement studio to computer. Recording quality is good.

Well worth the money. Technology advancements have made home recording simple and affordable. I like this unit very much.

Fostex MR-8
5
I acquired this unit so that I could record different parts of the songs that I write in order to write new parts over them.
I went online to research products that allow you to do so. I found many different options, though my price range was not significantly large.
Because of this, I was forced to settle for less. Though with this digital recorder, I hardly did that. I found a great deal at Musicians Friend where I got the recorder,
a mic and chord, a tote bag, and the flashcard that is used to record memory. All of this for just 349.99


I liked the ease of learning how to use this recorder. I hardly even had to use the manual
to figure things out. At the same time, it provided all of the functions that I had been searching for in a recording unit.
I could quickly and easily lay down a number of tracks from my keyboard. Then a couple more from my guitar, mix those down to Tracks
Five an Six, then record vocals and any other things i wanted to add, mix all of that to tracks 7& 8. At that point I had created a song that could be easily transferred to my
PC via the built in USB port, Making it ready for burning.


The one thing that I don't really like about the unit is the way that memory is stored.
The Flashcard that came with the recorder had very little room for songs, so I have been forced to by more
flashcards to suffice my recording desires.though that is only one slight downfall.

I feel that the MR-8 was constructed very well. I have had no problems as of yet. It has only
been good to me so far. For the price of the unit, its quality must be considered supreme.


Overall I recommend this unit to any aspiring musicians that are looking for a cheap and easy way to
record their songs and expand their musical abilities.

This review was originally published on http://www.musicgearreview.com
Did you find this review helpful?yesno
»
Read the 10 user reviews on the Fostex MR-8 »

Published on 01/13/08
The latest update for the original MR-8 is v1.21, available here. The programs that can be used for transfering .wav files between the MR-8 and a computer can be downloaded here for PC(Windows XP/Vis…