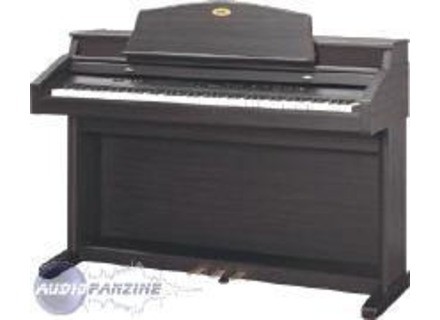 CA7, Digital Piano from Kawai in the Concert Artist series.

All user reviews for the Kawai CA7

seumon's review (This content has been automatically translated from French)

Touch: This is the best digital Pianon I've ever tried and yet I am HYPER difficult.
I would not put in 10 as a digital piano will never be a perfect touch to me, but frankly it deserves a clear l! 9
We can adjust the feel (light, heavy, normal, user mode ...) ke depending on what you play and its preferences, much appreciated!

I would say that I play almost exclusively to the headphone.

Piano sounds: be very good and ralistes (a try with headphones, the difference with the amplification system is enormous)

Other sounds: very correct, but I must admit I'm a real snob the top and that in any case I will not use ...

Effects: blah ... it makes service (the different types of reverb, leslie), but do not rely on others (delay, chorus, tremolo ki are not too editable anyway).
Metronome: super useful!
Recording mode: very useful to listen to all his faults ...

Expression: it was the decisive point in the trial ke I realiss store. The expression of this piano is very good, and I liked what ki is being able to sustain change (Function Virtual Technician) and the resonance of the chords prference. This program really allows the closer to the feeling of playing an acoustic.

I have been using 2semaines only, and I've already completely accustomed.
I bought it in order to Player Characters in an apartment, and be able to move without problems.

Certainly it is expensive, but by way of Germany, is a way to easily save 500 (thomann.de)
Way of Mantua is vraiemnt the best I've tried on dozens of different models all brands (yamaha, korg, roland ..)
To conclude:
This digital piano is very good, I use to work my piano (classical, jazz) and it has done its job,
as compared to other market models is its realistic rendering (sustain, string resonance, wooden keys) which reminds me of a very acoustic, and calls the game, experimentation ...
In short I am more than satisfied!
My only advice is try IT!
Did you find this review helpful?yesno

benuno's review (This content has been automatically translated from French)

Kawai CA7
5
88 keys
96 note polyphony
60 Sons .. good piano samples .. Ditables reverb effects and the virtual technician
Connectors: 2 headphone jacks, line in, line out, MIDI (IN, OUT, THROUGH), USB
3 pedals, the pedals of touffoirs not just on / off!
2x60W amplifier

Mythical touch, I wanted something that was as close as possible to a real piano and APRS have the test mcanique AWA I could not take me rsigner else. Heavy (well a rest even when a piano numrique), however, do not rely on it for cramps forearm strength ranges (y 'keyboards studies with small weights in the keys to a). As for MIDI I know I use it as a piano.

Excellent piano sounds, you get a must with the effects of rope and rsonnance touffoirs adjustable too. Also you can edit the CHARACTERISTICS of sounds and the DIFFERENT tempra. As for other sounds There's good and not great, but I wanted a piano.

I've had about a month and I am a serious fan. I wanted a piano numrique because I have not the possibility of having a real piano in my apartment (too much noise and I'm a nag ...), and then test it is that APRS which it is closest to a true (I have not tried the right way too expensive CA9 cons). It is actually more expensive than other pianos numriques but the quality and (we did talk about that to me clavinova in toc). I love the piano sounds and keyboard wood. A few more default, too complicated to edit the sounds ... Finally, it is mostly English in the menus the problem, and I also criticized the lack of deep bass but I have not found a better home or yamaha or roland kurzweil .. It is a numrique .. but by far the best ...