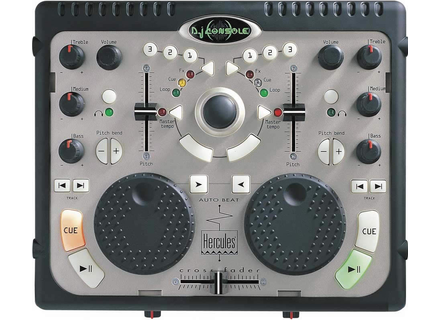 All user reviews for the Hercules DJ Console

When I bought it, I needed a new sound card very quickly.
I chose it because I thought I would get a sound car plus a controller.
I needed a sound card for monitoring and also to mix my MP3s with my vinyl records.


I had PROBLEMS during the installation because it wasn't recognized by the computer, but I finally succeeded after many attempts.
The manual is enough. The latency time is ok.


I used the software tools provided but they are not quite finished technically speaking. I had latency problems and the cue points were not reliable.
I could only playback one single track.


I kept it one year and it didn't do what I expected.
I later bought a secondhand Edirol FA 101. The sound was much better and I didn't notice any latency. Now, I have an Echo Layla and I guess the sound quality will increase again.
I sold it again.
This was my worst buy and also my worst sell ever.
--Awful! Just a toy! For the same price, you'd better buy an Edirol or an EMU.

Hercules DJ Console
3
Used for more than 6 years
My first digital console, I sometimes use it again
Most: simplicity
Least: too simple
Good quality / price ratio
At the time it was a good choice
Did you find this review helpful?yesno

tweak's review (This content has been automatically translated from French)

Hercules DJ Console
1
I wanted a sound card, I do not know much and especially I had my computer cramerla card. I J'tais press over the FNAC and asked them better map, because I remembered to have seen the bottom for sale.
I thought I would have a Controller in addition to a sound card.
My silent ide to have a card for the cost but also to wedge my MP3s with my vinyl.
From the point of view between 250 and output I have not been heavy.

Installation with no problem because it recognized but n'tait APRS over and over attempts by Russia I finished installing.
The manual is enough memory and no masses of latency.

I used the software provided n'taient and they failed. Latency silent and audible cue points once walked three.
I read a track and you should not ask for much more.

I kept it a year and I could not do what I wanted. In fact I had a good sound card of desktop PCs but absolutely not to make or mix zic. So the objectives of this card with taient half.
APRS it I bought an Edirol FA 101 and a ca t ct the day and night, the silent sound much better and I had no latency for only 100 more in time. Now I spend Echo Layla and I think it will be even better.
Also I sold the toy (the dj console: I call it as a) only 100 a year APRS its release and my purchase.
This is my worst and my worst purchase resale throughout the hardware I achetrevendu
-> A stew! a toy! A limit to dtendre or just have the sound on his PC. For the same price it is better to turn to one or Edirol EMU.
Did you find this review helpful?yesno

bast_net's review (This content has been automatically translated from French)

Instalation easy drivers available on the manufacturer. I reinstalled many times and no bug to instal.
It can be used either in controller or in sound card, or a combination of both but nimporte which case the connections are easy

VDJ is in rel. the same buttons, fader ...
the knob are quite prcis, the faders can galements although flexible.
both drives are convenient pout stall tracks but do not expect to scratch with.

I used to annimation small parties with friends or family and is Extremely pratoque. Of course it is not material "pro" but to have fun with VDJ and make good combos is almost indispensable.
The output quality is good.

The price remains but one can raise one's PC and VDJ, you will have what Russia a good musical entertainment.
Did you find this review helpful?yesno

Gorgonzola's review (This content has been automatically translated from French)

Hercules DJ Console
5
My need was to find a MIDI controller lating jog a platinum cd and a pitch.
I use a mixer Numark two ways to mix and not the controller.
my use of the controller's just to move forward or backward with the jog, not automatic sync needs (rigging ear) or pots of Hercules (since I use my mixer)
Mix on HP laptop (1024 ram, 60 gig mp3 songs 320 kbps achets on bleeps, konpakT.mp3, beatport frankly with a good amp and speakers that correct, qualities similar to cd)

When we use the Hercules console only for his jog and pitch, frankly for the price I'm so happy it fulfills its role (I did not metter 400 euros for just using the jog the Vestax or the total kontrol )dropoff window

I advance, I retreat, I hold, I accelerates, I slowed down, the mix was I doing repeats on my mixer, a Mtal with sturdy buttons!

I have a configuraion that suits me, I do not give a shit about the appearance of my dj console, I could mix even without mixer!

only the rsulat and music is important!
Did you find this review helpful?yesno

DJ Touf's review (This content has been automatically translated from French)

Hercules DJ Console
3
- What characteristics have motivated your choice?
Cheap and then to discover the mix is ​​cool! In addition it can serve as a bridge between your PC and stuff to register!

-Assets:
Timing automatic rhythm great for simple rhythms (electro house)! It's great for a beginner who does not want to be disgusted by the timing of tempo!
Ability to save our gear sets is ac on PC!
Can serve as a table for two turntables mix!
Compact we can take it anywhere!

-Cons: oulalalalalala
Sometimes severe acute potentiometer or medium disrupts the tempo when touched if the mode of self-leveling is not activated!
Latency bcp too much!
The recording points cues bug! Normally we can registered by 3 zik I can only one! It only works when I use my mouse!
The finish looks like a plastic toy but a good price or it is not asking too much!
The console is too compact! Mix When you touch the buttons around the rule of what is without purpose! Crossfader too close to jog vinyl!

The update does not work well is the galley! The installation was easy for my case!

In private party for a little partt mixed with some friends on the move etc. ... and above all to save the mix makes my gear ac!

In short this console is made to discover the mix or to record sets of gear on our PC! Beginners will be filled because thanks to the automatic setting tempo from the start it will create sets of good quality! This encourages learning for later timing tempo manual! I do not regret this purchase yet I confess that this console can be significantly improved! To purchase only able to start or mixed PC for cheap!
Did you find this review helpful?yesno

okpane's review (This content has been automatically translated from French)

Hercules DJ Console
5
-What characteristics have motivated your choice?
Design, Price, USB, Virtual DJ
- For what purpose?
The evening entertainment, the DJisme

- The installation is done it without problems?
Yes
- Have you experienced any incompatibilities?
NO
- The general configuration is easy?
Not at all the microphone and the preview to the headphone are difficult to config is chian.
- The manual is clear and sufficient? ...
NO

- The drivers are stable?
Yes it can go
- Are they often updated?
No I do not see update Hercules Dj Console, it remains in 1.3
- What software do you use most often?
VIRTUAL DJ
- What you get lag?
2ms
- How many tracks you get to record / play time? ...
2 maximum

- How long have you use it?
6 months
- What is so special that you like most and least?
EXTRAS:
-Nice design
Well for beginners
-Complete
Can connect a midi-
Cons:
-Difficult to configure
It does not work microphone and line input, one must config
(Once it's on the computer, nothing can oin other connected
- Have you tried many other models before buying it?
NO
- How would you rate the quality / price?
Bof € 250 for a beginner trick
- With experience, you do again this choice? ...
I do not believe
Did you find this review helpful?yesno

rvo-pictures's review (This content has been automatically translated from French)

-Yes
Non-
So-easy
-Can do better, rponses all the questions we ask ourselves are not treated

-Yes
-Not (only one I know) but I expect nothing else!
Traktor DJ Studio, (soft not deliver top: virtual dj = sound "blah" + high-frequency filter cutoff is too high, mixvibes = stalling badly ISSA, new dj (I forget what I did no rain).
-10ms
-4 Reading, no test record.

-18 Months
It +: command simplifies software (pots and rigging) and compacitbr /> it - (VERY LARGE LESS !!!!!!!): trs switches rotten, especially the large + (start / stop particular, and that the ds beginners, and getting worse: between bouncing contacts, actions and contacts inactive self-RPTS (thus nullify the action that wish e!). But the mouse replaces the contacts dfectueux trs well!
- No consoles, but consoles DJ classics.
trs good quality price ratio: it is not pro gear, and for the price, is a pretty good its promises.
It has concurence dveloppe since amritrerait to revisit it before rechoisir.Mais I do not regret my choice
Did you find this review helpful?yesno

rezous's review (This content has been automatically translated from French)

Hercules DJ Console
2
- What characteristics have motivated your choice?
The first prize (100 euros used), then the practicality of being able to plug into the computer.

- For what purpose?
Personal pleasure

- The installation is done it without problems?
It took me two days to install.

- The general configuration is easy?
Yes, once the pilot programs "mix virtual" installed everything is easier.

- The manual is clear and sufficient?
I do not have ais (buying used).

- The drivers are stable?
Yes

- Are they often updated?
Everything works fine (so I do not update)

- What software do you use most often?
Virtual DJ

- What is so special that you like most and least?
The +: it looks like a toy is joking ... but shuts down the ca
the -: limited functions - too much latency - no details in the knobs and faders
- Have you tried many other models before buying it?
Not

- With experience, you do again this choice? ...
If you have 250 euros to spend on anything is a good choice ...
I personally will not go that choice.
Save you will see, with proper gear, then it's broke ...
Did you find this review helpful?yesno

Hercules DJ Console
1
Did this console for 1 week and jai afraid it does not what we were promised.

The big problem is that the songs 'pop' or 'acclrent' without even having to touch CONTRL!

Skip tracks and speed without even touching the controls

I can not see the interest of a stable non-console
Did you find this review helpful?yesno
Cookies help us improve performance, enhance user experience and deliver our services. By using our services, you agree to our use of cookies. Find out more.