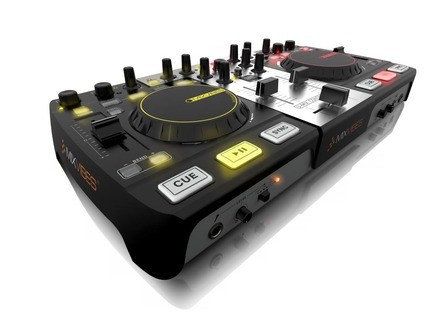 U-Mix and U Control Mixvibes was founded in 2003, when they started to market a product that allowed mixing and scratching digital files using time-coded vinyl records and CDs with the use of a sound card. Nowadays, Mixvibes offers two products: the VFX Control, a video mixing solution, and Cross DJ, an audio mixing solution. This review refers to a bundle that includes a controller called U-Mix Control Pro and the full version of the Cross DJ software. Read more…

Mixvibes U-Mix Control Pro
4
How long have you use it?

Almost 3 years, I use it mainly with timecode Mixvibes

no not at the time

+: For its size it makes a lot of things and then jogs despite their size are very responsive and the scratch is fun above
-: A little cheap, lots of plastic but it is not very serious

at the time it cost me € 249 now it is even cheaper so I would say interesting.

Yes, because I have not been disappointed with but I think in hindsight I would have at least tried other controllers.
Did you find this review helpful?yesno
»

ogala's review (This content has been automatically translated from French)" Very disappointed, to avoid"

I also tried the Denon. Than regret not having chosen this brand today.

My probème concerns the crossfader is worn by Mixvibes while I do've never used! Regardless, a HS cross, I do not care because I do not use it. The concern is that it moves by itself randomly, so impossible to put this service *** controller ... Trying to educate myself on this issue, I realized that there were dozens of forum topic Mixvibes ... So I'm not the only one.

I'm back on the machine at my dealer after 6 months of waiting I was informed that Mixvibes did not guarantee cross (hey it may seem normal) and mostly they did not have spare parts . Very risen too, my dealer (store sound that I will not mention) has vowed never to sell this brand and referring clients to other better built products (not hard) and especially with true distributor.

Today, I hesitate to fuck the window knowing that it will never work.

Mixvibes U-Mix Control Pro
4
I acquisition this little machine environment Octobe 2012 and therefore one can use it for more than nine months.

I try to hercules mixer MP3e2 four months before. this is the day and night. if this is a real toy in my eyes, the U-mix behaves professionally.

My preferences (most and least)

what I love most and responsiveness of the machine facing the computer. The software is provided (Cross DJ) and does so complete it's it's a real plus.

integrated sound card, no need to take the head with a USB sound card low end for a headphone back.

strength, metal base, a guarantee of quality.

buttons can a little, but for the price, I ask for the moon either.

the effects of freeze when you do a search in one piece with the jog.
in that the output 3/4 = PFL headphone. but after checking the forum, I now know that this is normal and I know the workaround.

overweight, but I quibble, because as I said earlier, it is solid and therefore pro.

the quality / price is right. have a machine of this quality at a lower price it is impossible. especially since I buy a Hi-Fi general store and not a specialty store DJ.


being new to the mix, I would do this choice without hesitation. but in the years to come, after I advanced, I think is to guide me to be the pioneer of Numark NS7 really tempting me.

(Edit: I put this advice to start the U-Mix Control Pro 2, it was obviously a mistake.
since, to enlarge the possibility of mix, I paired it with a controller and a Korg NANOPAD2 NANOKEY2)
Did you find this review helpful?yesno
»

Chris Kazvon's review (This content has been automatically translated from French)" Everything you need in this range!"

Mixvibes U-Mix Control Pro
5
I have since last October. I use it as a controller in its own right but also for 3 months with two turntables in timecode.

Before I had a Hercules DJ Console MK2, and I wanted something bigger and with more features.

Pros:
-We fully control the functions "essential" software, such loops, cues, effects, titles loaded. The more esoteric functions (beatgrids etc.) do not have keys assigned, but in my opinion not need shortcut on the controller, we saw changes (very) rarely settings.
-The onboard sound is good (better, no surprise that one of Hercules). The output level is slightly lower than with a CD player, but nothing nasty. I compared at a party with a CDJ 1000mk3. I put a CD into the CDJ engraved with an mp3 and loaded exactly the same mp3 file on cross DJ. The CDJ-mix and U were each connected to one input of a DJM 800 To get sound at the same level at the output of the speakers had to leave the gain of the path of CDJ set to 0 and that of the path U-mix on 1:00.
-It can be used as sound card for timecode (what I do). It responds well, and I for one am 10ms latency with a PC that will be 5 years (with a Core 2 Duo Acer 2GB and 2GB of RAM with Windows 7). I find it honorable. I did not crack nor any lag problem of the software.
Placed on a laptop stand at Thomann just above my mixer, it profits me midi controller.
-The controller has a "certain weight": frame construction with sheet metal. The jogs are well mounted, there is no play, or sailing. They can be found a little light at first, but given their size is normal.
-The knobs are nice, they are a "notch" on the EQ knobs when they are at 0.

Cons:
-The only (small) defect is that it's almost a little bit, and jogs a little bigger and a pitch slider a little longer it would be a must, but it would also be more expensive and less convenient to lug we do it for free!
Size is however not a problem, it is even possible to calibrate the sound to the ear without using nila sync feature or function match, only the pitch slider and jogs.

The price / quality ratio is very good for me, I would do without hesitation that choice!

Small point: the channel faders are not "smooth" as would a crossfader, they have a slight resistance to movement. We like it or not, matter of taste!

Did you find this review helpful?yesno
»
Read the 12 user reviews on the Mixvibes U-Mix Control Pro »