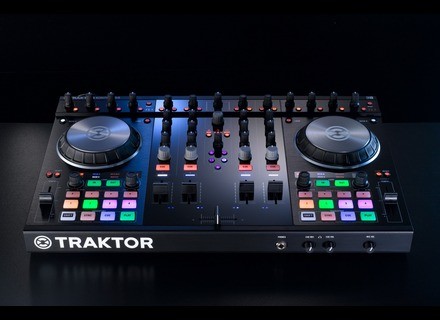 Introducing the next generation of the official controller for Traktor.

This edition S4 is located in the upscale brand as it allows a successful and absolute control of the software in its details, including the management of 4 simultaneous decks in (vs. S2 it manages only two decks)

Improvements in this version MKII are discrete, but to be mistaken, it is indeed an important development that follows the line of the latest features added to its NI Traktor recent months.
This allows to benefit 100% the last additions to the software (including the flush mode, decks remix ...)

The new S4 features improved ergonomics with, among others, the appearance of color pads providing a better visual identification in the dark (cue point, loop ...) a real plus when you live productions.
At first glance, the layout of the controller is identical to the version previously. However, and to strengthen the "pro" the Image S4, NI has made discrete improvements. The artwork was imperceptibly redesigned jog the perimeter was treated with a brushed aluminum effect giving a look "classier" to the machine, and finally the appearance of rotary knobs gray color filters allows to better distinguish the different controls EQ / filter at the mixer section.

The "flush mode" function appeared last spring in Traktor is not left since NI has equipped its new S4 a button for this purpose, located at the right and left ends of the S4, just above curves pitches linear. In addition, there is a button to "reset pitch" (function handy admittedly), detail that was lacking in the previous model.
In both of those buttons replace the two buttons offsets settings (+ / -) that were present on the S4 first generation function that is now obsolete.
In flush mode enabled, the 4 pads remix slots allow you to play the current track with a lag time of -4 and -2 (for the first two pads left) or 2 and 4 time (for the last two pads right) This opens up new creative and collateral effects in your mix horizons, all live! Hardware side, manufacturing is still neat ... we used NI.

The mic preamp has been improved (more gain than the previous model) The sound card can be used up to 24 bits / 96 kHz with a latency range down to 1ms (warning: your computer must follow) Finally, the new S4 and plug-n-play environments with Apple (iPad ...)

Very good product that NI offers here. A controller of a professional who focuses on perfect ergonomics between hard and soft.
See the source
Did you find this review helpful?yesno
Cookies help us improve performance, enhance user experience and deliver our services. By using our services, you agree to our use of cookies. Find out more.