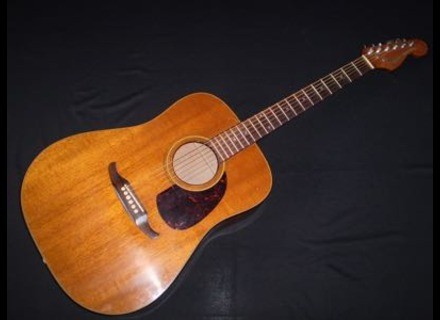 Fender Newporter [1985-1992]
5
Korean guitar in 1990, this dreadnouth is made of wood from the family of acajoux but I can not say which because I have no other info than the instrument itself!
The table is massive but two songs (such as tables of flamed les paul!)
The handle is a bit unusual for a folk because of V-shaped, it has a touch palissendre 20 boxes (junction to the 14th) and a head so stratocaster for a highly original folk (the electrified folk say some! !)
The frets are medium and decorations (biding) are actually quite simple compared to the massive fender logo decorating the head but not spoil the general appearance, so a nice guitar!

The handle, when you're a fan of stratovolcano, is a pure delight, it's extremely close to an electric comfort level, no problem to adapt it! the access is limited to acute, dreadnouth requires ... But nothing on this guitar when redibitoire has ergonomics and weight if it is not afraid of the handle in V

Sonoritée plain Balanced although a small peak in the lower medium will be felt, this skyscraper is the dreadnouth type. It can however play a rather subtle when he intends to play although I prefer the agreements in / harpèges in picking but it is also true that I am not an ace of that technique either!

I discovered the guitar as he can but have replaced my old Cort pleasantly AF550TF bringing a little something that makes the difference ... a solid table!
This skyscraper is original and sounds great for a guitar of this price range (a rating that his argus is 400euros but we find it easily for a hundred!)
This guitar as chocolate velvet reflections that make it really stand out against its blades as sisters and just for that, I love it ... then as well, it sounds!
Did you find this review helpful?yesno
»