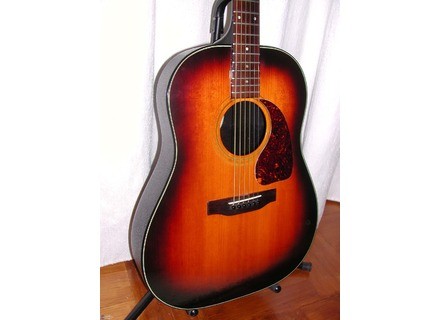 Gibson J-25
4
I have a Gibson J-25 1983. This is a U.S. Gibson, rather special because the back and sides are made from Carbon semi-round back (very unusual for a guitar - except for Ovation - and it is to my knowledge the single Gibson have proposed this system) model. It was produced between 1983 and 1985.
The handle is a treat TRUE (mahogany)! The action is nice and unique gameplay! A bit like my LG-0, we have the feeling of playing on an electric guitar while having the pleasure of being a folk.
Negative point, but whatever, it is not electro. The installation of an amplification system seems important to take full advantage of its features.
The table is made of spruce and rosewood fingerboard.

The guitar sounds, ring. You scratch and we get immediately a very typical sound (especially since it varies much more about what kind of guitar based on the way we play - finger pick flexible, semi-rigid ...). The bass is round and soft, but not too much, the highs are present but not crystalline. The sound is very balanced amount. Suffice to say that this is a guitar as you like and perfect for multiplayer play or Register!

I think this guitar is basically made for pop-pop/rock and rock. Is neither jazz nor blues I could say about these styles but it seems interesting for some of these games.
In any case, the sounds I like to play (Led Zeppelin, Rolling Stones, Aerosmith, Jeff Buckley, Radiohead etc.) It suits me perfectly! Trèèèèèsssss easy to play and the sound comes out immediately, without the need for artifice.
Positive, the sound is very present and large (thank you the Carbon semi-round back). You can easily cover several instruments without being amplified.

I use since October 2013. Since it is a rare model I've tried other guitars. I can not compare it with other J-25, especially since you can not find (almost) no videos on the net. I'll try to post one gives a real insight into this beautiful guitar!
In any case, I (re) make this choice without hesitation! Especially since it is one that is no longer produced by Gibson Guitar "collection".
Owner of a J-45 and an LG-O in GIbson, I can say that it perfectly complements my equipment. More focused rock or pop / rock to the Beatles, it is really interesting for a guitarist who wants to have the playability of an electric guitar while having a unique sound, the time between an acoustic and an electric.
Just to clarify, I REALLY do not like Ovations. This Gibson is really different, nothing to do with these guitars. Here we find a real sound!
Did you find this review helpful?yesno
»