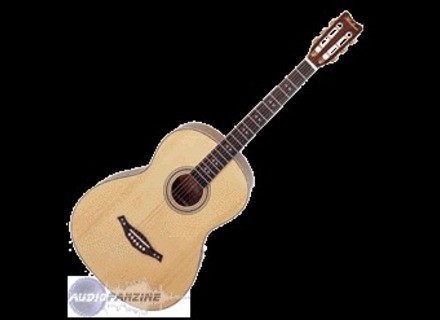 Hohner HF75
5
I took up guitar as an older adult (late 40s I have been playing, off and on, for 10 years; I stink but I'm getting better. I enjoy Folk, Fingerstyle, and light Rock. Leo Kottke, John Fahey and Ry Cooder are like gods to me.

This was purchased on the internet because I wanted a "parlor size" guitar that I could play on the sofa or chair in any position without bumping into everything. I paid $129 plus shipping($30).

This little beauty sounds great.I can't figure out why. The solid spruce top is glossed and not particularly thin so it should not sound so resonant, but it is clean and bright from bass to treble. I put on "SILK AND STEEL" strings and didn't like the sound as much so I but on regular D'ddario phosphor bronze lights and the sound is great. I have a Takamine G220 with the same body shape and in the same price range and it sounds "dead" compared to the HF 75.

The unusual "open" headstock, which I don't mind, is a separate piece and is cleanly joined to the neck diagonaly. You can see the joint although it looks very strong. The OVANGKOL wood on the sides and back look O.K. on the back but looks like plastic(it isn't) on the sides.

Built like the proverbial "brick s***house" SOLID. Clean lines modest inlays, oval perloid markers on the neck and bridge comes with an uninstalled with a pickguard (stickyback). Leave it off unless you play HARD with a pick. The guitar looks much better without it.

Despite the fact that I don't play very well, I have a great ear and own about 20 guitars, including a custom spruce top solid wood Martin, but I find myself picking up this Hohner HF75 the most.