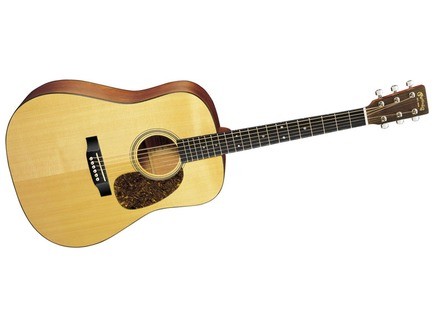 Martin & Co D-16GT
4
i bought it at guitar center about 3 years ago, this was the last year that the d16 had a rosewood fretboard and bridge, before they started using micarta. I had been playing for about a year at the time, didnt know much about guitars and i needed a new one. I knew that martin had a good reputation so i played all the martins under about 1300 dollars, and i liked this one the most out of all of them so i bought it.

i like the tone a lot. It is a great strumming guitar in my opinion, has good volume when its played more aggressively. Its very pretty, but also quite simple. I had it set up right when i bought it and the playablity was great, and still is. Its a great guitar for the money without a lot of fancy cosmetic stuff.

sometimes you want fancy cosmetic stuff. It doesnt have much volume for delicate stuff, unless you use 12s. I play a lot of jazz, and this guitar isnt really the greatest for fingerstyle or for soloing in my opinion, but sounds okay for comping and rhythm based stuff. But i guess thats what you get an archtop anyway, not a martin dreadnought. I had a martin gold plus put in pickup to take care of the volume issue, and it really brings out the sound plugged in. Could use a cutaway, but you get what you pay for.

Someone who reviewed this instrument, mentioned that he had yellowing around the bridge and the neck, and that an experienced shop told him that the bridge was coming up because of the bracing underneath. I have the same yellowing and i went to the best luthier in louisiana who luckly lives in my town, and he told me it was dye leaching from the rosewood, and said it was sticktly cosmetic and hes sees it all the time on these guitars. And that it happens usually if the guitar gets hot, or is left in a car ect. im not saying im right and hes wrong but just not to be discourged by the quality because it is fantastic.

very good guitar for the money. It is an awesome guitar for folk and acoustic rock. It sounds awesome and looks great.

Martin & Co D-16GT
5
Purchased privately in the UK s/h £500.
I have several beautiful accoustic guitars, including a vintage Guild F50(1972) and Fylde Orsino(1979). I have been interested in the tonal quality of Martin Guitars, and have spent considerable time playing right accross their range. The best one easily was the 00028 Custom, which beat all the others for tone. Next in line was the D16GT.

This guitar is not fancy, but the tonal quality is amazing, and it's easy to play, accepting light gauge strings (Martin extra light) without significant loss of volume/overall sound...a massively important feature for one who has light sensitive fingers.The tonal spectrum is responsive and sensitive too, and the mahogany back and sides drive those tones deep into my body as well as the room, giving me a feeling of being massaged by sound,wonderful!
If this is what she sounds like now, a few years down the line with mellowing in...
As I currently often play without amplification with louder instruments I appreciate the volume.

the only thing I don't like about it is the fact that it feels so new!

At first glance a bright an cheerful looking instrument, but then so many these days look so great on the wall, until you come to play 'em! The spruce top wood grain is reasonably close and tight(not anywhere near as tight as the Fylde Orsino),and at least they've used matching sets.Gloss is a bonus, as I know several friends with the non-gloss models and these do mark easily.


Amazing that modern design and construction can bring such a quality versatile instrument into a price bracket that makes them accessible to many more people. Wish they'd had these when I was a kid!

Martin & Co D-16GT
5
I bought this guitar about two months ago from a large music store in Lansing, MI. It was about $800.00 after tax, but it came with a hardshell case.

This really is a VERY nice guitar besides the fact that it smells really good, it has a bright tone, GREAT sustain and volume, great equalization, and is built from the best woods you can get(cedar, sitka spruce, mahoghany). Plus it is all American-made by a famous and renouned name

The only things that bother me are the bright sound it has can get a little boring if it's all you hear for a long time and I kind of wish it was a cut-away. Oh and it is a little pricey.

As for as the quality goes IT'S GREAT...from Martin what do you expect? I haven't had the slightest problem with it and I have even bumped it pretty hard a couple of times(accidentally). It doesn't scratch easily and the glossed top offers some reassuance in case you drip some soda on it. Also it is just one of those guitars that feels sturdy and right.

If you have the means to scrounge up 800 dollars and want a good acoustic buy this one because for quality like this in many other brands you would have to spend well over 1000 dollars.

Martin & Co D-16GT
3
I bought the Martin D-16GT three years ago at Guitar Center after visiting different stores and playing a bunch of different makes/models. I paid $720 for it.

The guitar had great tone and action for it's price range. The construction seemed very solid although as a whole it's pretty delicate. I don't take it camping. It looks great, but I like conservative looks so it may not appeal to everyone. I admit I had been pining for a Martin for many years so the name and reputation influenced my decision greatly, much to my chagrin later on.

Recently there's been some yellowing around the bridge and neck joint. I took it to a local guitar shop that has a great reputation for knowledge and experience. They told me the bracing under the top was coming loose and the yellowing was the bridge beginning to pull away. Same for the neck. I was mortified!! This is "legendary" quality??? The owner of the shop stated matter-of-factly that any Martin below a D18 is the old Sigma line and is basically a disposable guitar. Lifespan is about 6 years. Definitely not the heirloom guitar I thought I was buying, one that would improve with age.

In short, I feel betrayed by Guitar Center and C.F. Martin. They sell these under the "legendary" and "classic" labels yet knowing full well they won't last. I thought I'd done due diligence in researching prior to purchase but I guess not enough. I won't buy another Martin unless it's a much older model in great condition, which is unlikely given they are severl thousand dollars.

This review was originally published on http://www.musicgearreview.com
Did you find this review helpful?yesno
»
Read the 11 user reviews on the Martin & Co D-16GT »