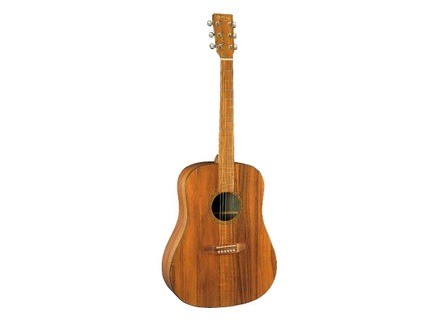 Martin & Co DXK2
5
The Martin & Co DX-K2 is a dreadnought acoustic guitar that's mostly made out of koa HPL, which is from a unique tree. Like all Martin guitars, this was made here in the USA and it doesn't have any pick ups or electronics since it's just an acoustic. There's no pick guard on here, adding to the overall beautifully smooth finish...

The playability of the Martin & Co DX-K2 is top notch. It's got a beautiful feel that goes hand in hand with the great finish on this guitar. It’s not a hard instrument to play, as it feels pretty close to about as fluid as you’ll find. I love the overall look to this guitar as well…

The sound of the Martin & Co DX-K2 is warm and full, definitely having it’s own sound while still be characteristic of a Martin guitar. It’s not too bright sounding and is overall quite well balanced in my opinion. I’ve only used it just messing around with it, but would love to get to record with it soon. If you know how to play a bit, I really don’t think you’ll have any issues getting a good sound out of this guitar.

The Martin & Co DX-K2 seems to be one of the best guitars that Martin has to offer in this price range, or is at least one of the best that I’ve played. I haven’t had a chance to record with this guitar as I’ve only played it a bit at friend’s place. I’m hoping to get to do some recording with it in the near future, as I’m positive it’s sound will be very nice on recording. If you’re a bit more experience and are looking to pick up a beautiful guitar that will last you a long time, the Martin & Co DX-K2 is definitely one to keep an eye on.
Did you find this review helpful?yesno
»

florenzito's review (This content has been automatically translated from French)

Round a little pushing at the very beginners, but you get used to quickly trs
Access in acute is not comfortable but a bit of acrobatics and it's all good ... some prfrerront a pan shot.
Good ergonomics, weight while adequate.

It breaks all the face! this guitar really looks beautiful, the fawn HPL Koa (Koa translate chips glued to the laser) has a more than Aesthetics beautiful ... in short everything that has the look and the sound does not stick not at all! Question her, the house martin revert! I tried it in the store and its completely silent dsquilibr low standards and middle and trebble compltement absent ... Its really shit as they say and do 650 E worth it!

As I said I tried it several times and each time a store's total dsquilibr rotten and is really the poor man's Martin! Honntement, I have a Cort Earth (bought 150 E) and there is really nothing to see! The Cort is too gniale!
If you are attracted to your Aesthetics of this guitar you will not! She will make a nice guitar dco trs! A word ciao!

emeric8's review (This content has been automatically translated from French)

The handle is quite enjoyable but there are better. The strings are fitted as original Martin pulling through. This is perfect for the sound but a lower firing facilitate jouabilit.
There's no cutaway but Access in acute is that simple.

I have a good fifteen assay acoustic guitars and electro-acoustic. I have not the sound of the Cort AIM, too mtallique. I tried the Art and Lutherie not bad but not perfect, a massive sound taglewood (pica / mahogany) 300 not bad at all and that a Washburn 200 dfendait well. I also tried a Takamine acoustic under 600 but frankly over the DKX2 none boxed in the same CATEGORY. I am against the snobbery in the choice of instuments and I possde of instuments (batteries) excellent quality that taient far from being the most expensive. DCID J'tais So really let their chance to around 300 instruments. But frankly, when Martin tries this, you can not buy another. The sound is warm, equilibrated with a precision no relation to what I have heard elsewhere. It didn 't not the choice.
Touefois, the sound is mostly extraorindiare jou finger. With mdiator it frieze rather quickly.

I just bought it and the sound is really incredible. The price is quite lev (600) and is not twice as good as some guitars half Chres but it all a step up and once got hard to give up. We pay the brand but probably worth the. It is true that some propose for the price of massive wood guitars can be noble, but facing the audio test, the choice is clear itself.