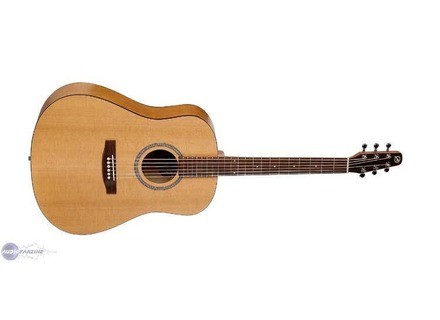 All user reviews for the Seagull S6 Original Slim

Seagull S6 Original Slim
4
The S6 "Slim" is the slimmer neck version of the well known S6 Original dreadnaught. The nut width of the Slim is 1.72", while the width of the Original is 1.78". With the Slim model, there is a slight difference in the soundhole rosette, the top binding and it does not have a pick guard. Otherwise, the Slim is identical to the Original. I have since added a nice pickguard to it from Terrapin Guitars, a great source for acoustic pickguards.

The top is solid cedar, the back and sides are laminated wild cherry. The finish is a satin laquer which is very thin, so be careful. But, at least fingerprint smudges don't show. It has a nice, natural and understated look. The tuners are decent and hold tuning well.

I'm not a gigging musician, I just play for pleasure and with freinds, and have played almost forty years. I play British Invasion, folk, early blues and some Indie stuff.

I picked this up in the local GC for $399. Could have gotten a better deal on EBay, but then, after shipping and insurance, probably be about the same $$.

I have been interested in the S6 for a couple of years, since hearing a freinds. His is a lefty, so I could only bumble around with it, but I loved the tone and neck feel. After noodling around in the acoustic room at GC, I settled on the S6 Slim.

I like the tone, projection (yes, it can get loud...without being boomy), and sustain. Express yourself with your fingers and it answers. I was considering a Takimine EAN 30, a wonderful guitar, but I couldn't justify the extra expense. The Seagull's neck feel and sonic ability just covers all the bases for me.

I don't mind the headstock shape, though some people seem to have an issue with it. I think it's refresingly different. HOWEVER, I would prefer the headstock with it's natural wood showing, not the dark brown laminate they put on it. It's not butt-ugly, but it would sure enhance the natural wood tones found on the rest of the guitar. Just a minor peeve.

Taken as a whole, it is decent quality. The kerfing and braces I could see are as clean as others costing more. The outside fit quality is very good, no noticible gaps. No unpleasant woodgrain variations or touch-ups. The laquer is not impressive. No noticible bulge on the lower bout from bridge-pull. The fretboard has a small bevel on the sides and is comfortable. The fretwork is good; after filing the nut a bit I have a nice, low action without having to bother with a luthier. The bridge saddle and nut are a synthetic bone which is not bad. I have no plan to change it. The intonation is fine.

The S6 is not a stunner to look at, but it is a great, versitle, bang for the buck, guitar. It is simple and honest. It plays and sounds great.

I have seven guitars and two amps. If my house caught fire and I could only grab one of these, it would be the Seagull.

yanikkusan's review (This content has been automatically translated from French)

Beautiful woods, a beautiful guitar at the visual. Semi gloss finish gives the guitar a truly "wood." The cedar is beautiful and the back and splice ... I did not think that was a cherry wood as beautiful, the colors maroon and black meet and mingle ... sometimes beautiful.

The whole is surrounded by a white border, it makes the head much prettier than the other seagull the same model.

Also the head is rather special. We know immediately that it's a seagull. For this reason I love and I find it more visually great.
Note: The S6 Original Slim and S6 are exactly like one last detail. What differentiates the S6 Slim is the width of the handle. In fact, the S6 Original has a wider neck than most folk guitar. This is a guitar qu'aprécient especially guitarists who used to play on the classics. The S6 has a slim handle standard width that is the same width as her cousins ​​folk guitars from other brands.
I also play on the folk classic but I prefer a narrower neck which is why I chose the slim model.

The neck is just as nice and there is the case to say: it is a real highway.

In terms of access to acute ca is a cutaway guitar not easy to access the notes above the 12th fret. (Know what you want access to acute or better overall).
In terms of ergonomics I say "perfect"! Slightly too small or too big, classic shape dreadnouth nickel. Before I owned a Yamaha and the level of ergonomics yamaha is like it or not ... Seagull we like it or love it ...!

As for sound ... I give you appointment the next chapter.

The sound for a guitar at this price is simply stunning! Brilliant highs lots of bass in picking is a pure happiness. For me the sound is really the highlight of this guitar apart from the appearance. I tested the martins, art and other stringed instruments and I have not had time to think and choose the S6.

I use it for almost a year. So it is still new and still has some time before taking the final.
Unfortunately I will try to sell it soon because I live by far ... far ... and I will certainly not take place for .. Snifff! But once there I bought exactly the same ... To tell you how much I love this model ...