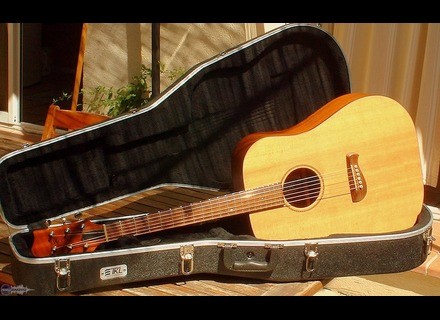 Tacoma Guitars DM9
5
guitar center st louis $660 looked for months for a good sounding 6 string,had a Martin DM paid for until this one showed up in the show room that very day put everything on hold after I played the tacoma DM9 went home looked it up on the net went back the next day took it home.

nothing comes to mind

DM9 solid sitka spurce top SOLID mahogany back and sides and some good strings D'Addario even comes with a hard case .

you can look forever and never find a guitar that sounds better for under $2000 yes I said $2000 because I tried them all Martin D-28 and even TAYLOR nether played better. best $660 I ve ever spent .

Tacoma Guitars DM9
5
I was out for a set of strings, but then I saw two Tacomas. I am no specialist but somehow believe to have a nose for good guitars. These two appeared outstanding just from sight. Couldn´t resist to play some chords. Both kept what the optics promised and I fell in love with one of them. To find out if I was only in a euphoric mood I grabbed other specimens for 2.500 $ and more, but I found those either "grey" ore uneven. ( Tending to bass, mids or hights.) Also none was so light from weight as the Tacomas, BTW.

Just hadn´t the 1.600,- DM ( = ~ 800$ ) at hand. Returned to store ~ a week later and the staff discovered that both meanwhile had been stolen by tasty thiefs.
It had been a first delivery to Germany before official start and I had to wait a while just like all sales persons whom I spoke to in other stores later, and who had tried Tacomas on exhibition, anxiously waiting for delivery themselves.
I got the same model. The only one I could find months later and not exactly that good like the one I had tried first - and for 100$ more.

First of all, it is a beauty in its simple appearance and satin finish. Even a layman could see that it is crafted with dedication. Made all out of solid wood. Sitka spruce top, mahagony sides and back ( and that mahagony still smells ... hm )
Is there anything left about guitars?
Yeah.., the sound. I send an mp3 to a friend in Holland lately for him to see what I was working on, actually wanting to know what he thought of the electric guitars part.
This is what he replied: "Yep, I know what I like. Your acoustic guitar sounds great.
It has a definition from the low e-string to the top."

I regret that I didn´t just grab the unit that came across the first day. That´s what I claim about the story.

Tacoma tried new methods apart from traditional building methods ( which had been considered to had been perfect already.) They used computers to recalculate structure and came up with less mass of braces and asymetrical bridge plates to correspond to different characteristics of high and low strings.

And one can well see how firmly parts fit together before they were glued together.

Only once before I experienced a western guitar to be so attractive to me. Unfortunately I didn´t internalize its brand and modell name, though. ( And still feel like jumping out of the window, when remembering that it was offered to me for merely 250$ without me taking the chance to ...)
:o)
If you are looking for an acoustic steel thing try to look fo a Tacoma for sure, even if it might mean longer distance to go, since not every store provides them.

You will find one thing very certainly:

Plenty of bang for the money.

execut's review (This content has been automatically translated from French)

Tacoma Guitars DM9
5
This beautiful guitar made in USA has a solid spruce back and sides
mahogany mahogany neck one-piece rosewood fingerboard and bridge.
tortoise binding, mechanical tacoma, satin finish and transparent pickguard.
The reputable guitar TACOMA n is more to do as the quality of violin making and design is exemplary.

The Dreadnaught provide you with a very warm and powerful sound (you can feel the body vibrate). The low round of mediums property very well-defined incisive highs without being too crystalline.
No doubt this is a guitar that reminds us that puncheuse it is good of the country of Uncle Sam ...

Its balance, its power, comfort gaming color and versatility make it a companion characters answering to all guitarists CRITERIA demanding.

This guitar is a very good guitar for a pro quality unbeatable price ratio in this range MADE in USA handle any massive very easy and very powerful, a true American!
Did you find this review helpful?yesno
»