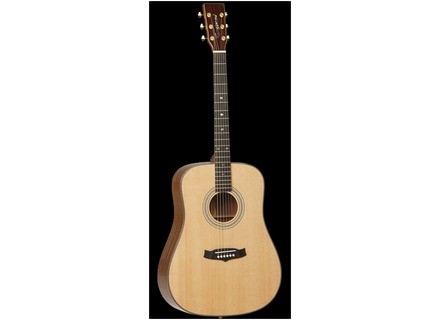 ghighi's review (This content has been automatically translated from French)

Tanglewood TW15 H
5
Dreadnought guitar style, certainly makes in Asia (like almost all now, even Guild!), But with a specification of luthiers Tanglewood rigorous enough, and select wood for these same luthiers.
20 boxes, the collection's outdoor 14 of the body (the classic for this type of guitar)
Fully in solid: mahogany back and wicker covers, table pica, especially bridge and keys bne! (The rve)

The handle is a bomb, an incredible ease! In addition both the tidal action of daisies, with a pull string that seems light (must be the 011, if cell is possible in acoustics?), It seems to play a electric, and most surprising: no frieze anywhere! Note that j'tais party to buy a Taylor partly because of the extremely easy to handle, but then the Taylor is pressed.
The weight of the guitar is pluttlger with a credit union not trs feeding.
The sound? L is also a bomb! Unbelievable. This guitar has a projection stupfiante. Note that I compare in the store a Taylor 110, a Guild (D40), a Tacoma Jumbo (I do not know the RF, but it was worth 900), and a mosaic Seagull . She buried them all. Much more volume and projection that Taylor, the Seagull, all in fact! The bass is amazing and powerful, treble Submitted trs also in short sound incredibly rich, which is trsdfini, mlodique wish, harmonics come naturally. This is a guitar "singing." To give just one example of the power: empty is a little less powerful than the jumbo Tacoma, ds that we play it becomes more powerful than the jumbo (the nature of the key must surely have an r the standard, long live the sidelines bne) and more DGIG more bass! and treble.

I play plutt rock and blues, and it is perfect to accompany singing, mlodieuse, both crystalline and supported by lower Submitted. For the blues, the solos sound of hell, plus the ease offered by this fabulous race.

I bought it yesterday, I do not dcolle.
The report qualitprix is ​​prodigious, her score under 600. I find that for a sr same quality, both in production (it's solid) sound that there should be double or more in Taylor or other.
Only BMOL, holding the Aesthetics, the mcaniques dores, sucks!
I would do without the choice problem.
A counselor, and buy urgently!

Tanglewood TW15 H
4
Certainly manufactured in Asia (Tanglewood was hidden away from the register on the guitar, I do not know why). Maybe in the workshops Cort (I say this because the engraving "Handcrafted" written in the body resembles that of my Cort MR710). It is entirely mass: table spicy AAA, solid mahogany back and sides, mahogany neck and ebony fingerboard with small abalone markers shaped snowflake. It is really very well finished. No default, everything is nickel, the neck is straight as a, the varnish is very clean, shiny on the table and sides, matte on the handle (very nice touch indeed). The frets are very well posed no apparent problem on that side. They are medium in size.

The handle is very nice. The ebony fingerboard really gives something extra in terms of touch and sound, and of course in terms of aesthetics. It is not settled "over the daisies" but still reasonable in action. Mine would still need a little touch of the saddle head. I take him to see a luthier in time. Ergonomics is a Dreadnought: tested and approved for decades. It is not ultra light but does not weigh 10 tons, either. It sounds immediately upon the first chord ...

This guitar broadcasts a really good sound. She is very balanced: the bass is deep, the midrange should be present as acute and superb. It is POWERFUL! Compared to my poor Cort (which sounds like a pot on the side), it can really play and sing loudly, and have an excellent presence in pure sound! I compared it to a lot of models, including a Taylor 110 and a Seagull Maritime. The Taylor 110 is also a great guitar (especially the comfort of the handle which remains unparalleled), but the bass is a less and less profound than the Tanglewood. What I also "disappointed" with Taylor: I had originally chosen because I believed (and the salesman, and finally he told me) it was still Made in USA (I know it's silly but I liked to buy a real Taylor Made in U.S.). Think again: the 100 and 200 series are manufactured in Mexico since 2008 (okay 60 km from U.S. factory ... but good). Regarding the Seagull: it is a very balanced guitar, very soft sound, but less potent than Tanglewood. The stick is also very particular Seagull (wide and flat, like a classical guitar). I deviated from my choice primarily because of that ... damage.

For the price (659 €, without cover, grrrr!), This guitar is a pretty good deal for those who want a pure sound, powerful and balanced, with bass and treble worthy of Martin. It is very well finished, with no apparent defects in workmanship. Course remains to be seen how it will age: the shop where I bought it was a model of "expo", which was not very well supported changes in temperature of the store and the neck was still (despite what that the boss wanted me to believe) a little too moved to my taste. For now I do not give up (I left out my Cort is a good guitar for the price anyway). I'll just do a little deal with the Nut and it will be perfect ... and then install a sensor or transducer LR BAGGS history out soon in concert anyway.

Edit of 02/09/2010: still going strong but be careful to adjust the truss rod, which I feel is much too tight from the factory. I was referring to the model expo that I tried where the handle was going a little too far back (which formed a "break" at the junction body-neck ", and although it is a" disease "that I 'I found a pattern seen in Paris (result: it bordered on too). It certainly caught after cost but should be checked. well I had to loosen the rod of mine from the early days to avoid it parte back now ... nothing to say, the curvature is perfect, the battery string height in standards and it moves more na! And I love him more!