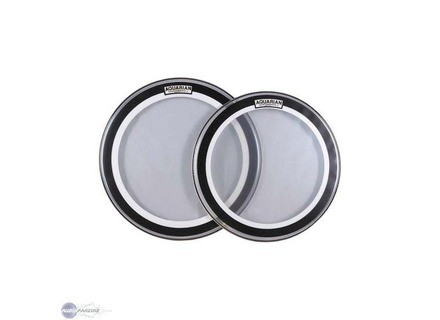 
8 user reviews
Find it in the classifieds starting at $30 Avg used price: $30

Aquarian Super Kick II
5
(Originally written by darwin666666/translated from Audiofanzine FR)
I replaced all the Remo heads of my kit with Aquarian heads, including this one. I discovered this brand with this head! I read reviews talking about how it doesn't last too long... I play drums really hard, including the bass drum, and let me tell you something: I have never played the same bass drum head for a such long time!!! I know it's very expensive but I recommend you to buy it if you play hard. The sound has a very hard attack and a fat sustain (if you don't fill the bass drum shell with a blanket!) and the head is extremely sturdy. I was used to having to customize my bass drum heads but with this one it's not necessary: just install it and you'll get a huge sound!!!

One more time, it's quite expensive but it's worth its price!

I installed a complete Aquarian set on my drums and I love it!
Did you find this review helpful?yesno
»

Aquarian Super Kick II
5
I have been using the Aquarian Super Kick 2’s for about 2 months now and this by far one of the best kick drum heads in the market. I didn’t think that these would be too much different from other kick drum heads, but I was blown away by the power these added to my kick drum. It tops the Remo Weatherkings. The Evans G2’s are almost as good, but these are still better. This is a perfect head for anyone who wants a powerful kick while still holding the muffed sound to limit excess overtones. The in bound overtone reducing foam ring is durable and is stuck on to the drum tight, making these very durable.
I use these on a 22” Gretsch maple kick drum and it sounds phenomenal. The heads was bought to replace the stock Gretsch heads on the set. I paired these with Evans EC2’s on the toms, a Remo Black Suede snare head and this on the kick, and it seems like a match made in heaven. This set up blends high pitched tome with a low cracking snare and a thunderous kick drum.
I have used the Remo Ambassadors, Remo Black Pinstripe, Evans G2, and various Attack and stock drum heads, and these Aquarians are by far the best of all of them. These do have a steep price, but for the extra $5, they are well worth it. These sound great in the studio, in a live performance setting at a bar or auditorium, or just for practice. They also mic unbelievably well, as the mics capture their great attack. These are very good looking, great sounding heads that will enhance nearly any drummers sound just by adding this to your arsenal. Great for metal, jazz, or pretty much anything you throw at it, as it is very versatile. I would buy it again if I had the choice.
Did you find this review helpful?yesno
»

Aquarian Super Kick II
5
I’ve been using the Aquarian Superkick II bass drum head for over a year now, and I wouldn’t use anything else. For over 6 years I’ve been a die-hard Remo guy. I’ve always used Remo heads and I only used Remo heads. But I bought a set of vintage drums that was re-headed with Remo heads on the toms, snare, and front of the bass drum. On the batter side of the bass was something new. Aquarian superkick II it read. I played around with it for a little bit. Tuned high is sounded great, tuned low it sounded great, and in the middle is sounded great. I was surprised to how great it sounded; I didn’t have to put any muffling in the bass at all and it still it had the perfect tone. This was a 20” bass that I tried it on and I decided to keep it there for over a year until now. After being impressed with 20” bass head I decided I’d give it a shot on my 22” bass drum to see how it compared. I put a new head on and with little tuning I had it all set to go. The kick suddenly sounded amazing, it gave just enough boom and had a great low end to it. Now I decided since I was already invested into Remo I’d give both a fair shot, but the Remo head didn’t have the ability to play as well as the Aquarian. I think this head is the best out there. It’s cheaper than pretty much all bass drum heads, and it sounds good at any tuning level. I would advice you to consider trying it. It is surely worth the money, and you’ll get the perfect tone for your bass you’ve been dreaming of.
Did you find this review helpful?yesno
»

Draz81's review (This content has been automatically translated from French)" Top"

Aquarian Super Kick II
4
I got OCCAZ (almost new) for a ridiculous price, so I say "go for that price, I bought out of curiosity."

I have a GC 20 "birch (not upscale, stagecustom Yamaha). I tried not sound or METAL ROCK, I am especially funk pop.

I ride the skin, after ten minutes of testing I get the live sound I was looking for! Great for that! Suddenly almost nothing to put in the GC so we feel we operates all of capcité was ... OUAUUUHH Low frequencies .. It takes guts. In short, great skin! I think it is a good investment in any case I'm delighted!
Did you find this review helpful?yesno
»
Read the 8 user reviews on the Aquarian Super Kick II »