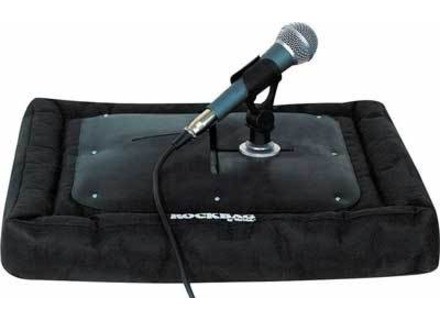 - How long have you been using it?
About 14 months.

- Which feature do you like the most / the least?
Just turn it 90Âº and it will perfectly fit your 16" or 18" kick drum! Its size and the material's density make it a perfect baffle. It's heavy enough to slightly add some bottom-end to the sound of the instrument!
The microphone stand is simple and robust. Just place and move the mic on the rail on the middle of the cushion.

I regret having to fiddle about with a Shure Beta52 (you can use an adapter...) because the connector and screw thread axes are parallel to each other. I'm using an angle bracket which I attached between the mic and the rail of the cushion. It doesn't move at all and gives me more possibilities to place the mic.
There are two velcro strips on the bottom side but I can't use them in my 22" bass drum because they don't match its shape, so I put two straps attached to the lug screws of the cushion so that nothing moves during transportation!
Another weak point is that the plate on the top smells like burned rubber... 14 months after buying it the odor is still there and it has impregnated the whole room...

- Did you try any other models before buying it?
Like most drummers, I tried lots of things from the most dubious to the most professional (from foam pieces and famous brand muffles to blankets and pillows...) but I've never found an effective, practical, nice-looking and affordable tool... But this product clearly comes near!!!

- How would you rate its value for money?
Very good... in spite of the necessary home-made customization (in my case!).

- Based on your experience, would you buy this product again?...
Without a doubt!!!!!!!

PS: The use of a vocal mic as shown on the photo isn't recommended and could even be dangerous for the mic...
Did you find this review helpful?yesno
»