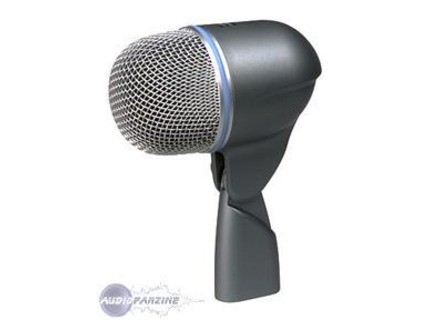 Beta 52, Dynamic Microphone from Shure in the BETA series.

Product replaced by the Shure BETA 52A.

This mic is a good bass/kick drum mic for both live and studio sound. It's relatively cheap and built tough so it works on stage but has a sound quality good enough to use in the studio.

This microphone has a pretty good sound. I primarily put it on bass cabs or the outside of a kick drum. It has a nice beefy bass response that can get some great tones. I prefer the AKG D112 to this mic for those applications but it is pretty similar in quality. I like to pair this mic with another mic with higher frequency response because it gives a nice low "oomf" but lacks some clarity. On a kick I use this on the outside and put a RE20 on the beater. On a bass cab I will use this paired with a 57, 4050, or just a bass DI. I haven't tried this microphone on much other than really low frequency sound sources but it sounds good on those. For the price its a really good deal. A decent kick mic will improve drum sounds greatly. If I had the option to buy this again, I would just pick up a second D112 because I slightly prefer its sound to the Beta 52.
Did you find this review helpful?yesno
»

Bought back the bass drum.
Works perfectly in this use provided you take the time to place it correctly, and have ad hoc microphone stands (foot cast if possible ...)
Also works well on bass amp.
Expensive but durable.

will1gson's review (This content has been automatically translated from French)

Simply brilliant pure bass drum! Take a Beta52A Travis skin outside of the GC was coupled to an SM91 inside .... ca breath away!

Truffle's review (This content has been automatically translated from French)

- What is so special that you like most and least? At ease in any conditions

- Have you tried many other models before buying it? Not

- How would you rate the quality / price? very good!

- With experience, you do again this choice? Yes! For his part mat, in studio or
live! We tested this av a Audio Technica AE 2500 is a matter of taste compared
to color the sound (minime!) but the sound quality is beautiful and there!

Did you find this review helpful?yesno
»
Read the 6 user reviews on the Shure Beta 52 »