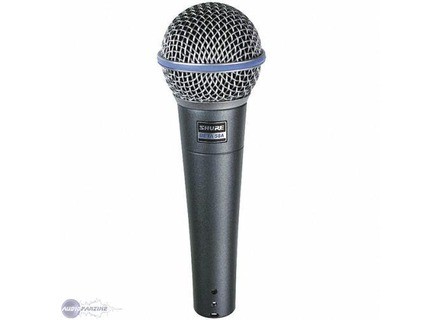 Beta 58, Dynamic Microphone from Shure in the BETA series.

The Shure Beta 58 is not so much an improvement over the legendary Shure SM58 as much as it is a recoloring, or revoicing. It offers an alternate flavor to the general feel of the SM58, and the result is an increased detail in the high frequencies.

From experience, I've noticed that the Beta 58, if I had to make a sweeping generalization, is better on female voices than it is on male voices. For males, I prefer the old standby, the Shure SM58. I like the midrange presence of the SM58, while the high frequency response of the Beta 58 is far superior. The SM58 does have a tendency to get a bit woofy though, so for fuller, richer voices, the Beta 58 may very be a better choice, male or female. I have a richer (in context of most rock and pop singing) high baritone voice, and personally, the Shure Beta 58 is better on my voice than the SM58.

For this, I say that unless you have tried it yourself, stick with the SM58. You won't be disappointed.

Shure Beta 58
3
This mic is a moving coil dynamic from Shure. It looks and feels like an updated version of Shure's SM58. It's a dynamic, so you don't need any phantom power. The pickup pattern on this is cardioid. The primary use you'll find for this mic is on stage for vocalists. The frequency response is tailored to this usage. There is a peak around 3k for added clarity and sharpness on the voice, and there is a generous roll-off on the bottom to compensate for boominess from the proximity effect, or from someone handling the mic as singers often do. There is a built-in mesh pop filter to aid in cutting back on plosive sounds. This mic offers very good side and back rejection, which is great in a live situation where you want to minimize your bleed - especially on the lead vocal. There isn't an on/off switch like there are on a lot of hand-held vocal mics, which is unfortunate because those can definitely come in handy when the mic suddenly starts a feedback loop.

I have owned one of these for a couple of years. It really is very similar to the Shure SM58. I honestly don't really find a huge difference in the sound quality. The Beta does look a little nicer and flashier, but that doesn't warrant the large price difference. The Beta does sound just a little bit crisper, but I feel that the difference that does exist would easily get lost in a live setting because it is so small. For that reason I really think most people should just stick with the cheaper, dependable SM58 for live vocals. They will do pretty much the same exact job. I probably wouldn't get one again, since the SM58's I have are almost just as good.

I use it for 2 years, to replace a Shure SM 58 I had tried during an ox and I think the sound is warmer than the SM. In the price range of 200 euros, it is recognized by experts, I trust them ... When recording is nickel, live well, no feedback, no repisse a nice natural compression without having a rack of effect of 2 meters high.
Did you find this review helpful?yesno
»

Elias :)'s review (This content has been automatically translated from French)" Although"

I use it for 10 years.
I also have a Shure SM 58 I prefer. The BETA 58 is a bit more midrange.
This is a good product.
With the experience I remake this choice.
For singers these pickups are a reference.
Did you find this review helpful?yesno
»
Read the 9 user reviews on the Shure Beta 58 »