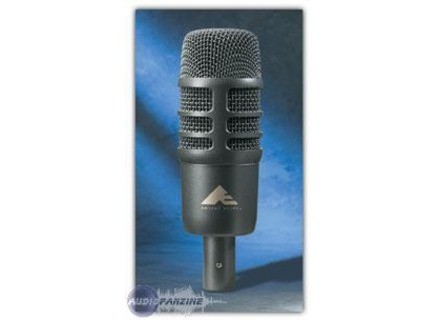 AE2500, Other Microphone from Audio-Technica.

The Audio-Technica AE2500 having both a condenser and a dynamic side to makes it a powerful kick drum microphone. It will give you a full sound if you have a good placement with it. You have to remember that the place with the kick drum is the most important factor of getting the sound that you want. You may even want to experiment with placement to see how you want it to sound.
If you record with the Audio-Technica AE2500 then you will notice the frequencies will seem like they are pretty flat. Some of use might like that and others might not. If your frequencies are flat then you might want to place your microphone a little bit closer but don’t ever do it. Or you could get into boosting some frequencies to get the sound that you want.
The value of the Audio-Technica AE2500 for the price is pretty good; it is a pretty expensive microphone to purchase for your kick drum. But your sound will thank you later once you hear how well that it is. I have used several similar microphones that are dual microphones and some of them sound similar to the Audio-Technica AE2500 but they are a little more expensive. Check out some of the Shure dual microphones if you don’t want to spend this much, they have some good ones that are similar and are a little cheaper.

Audio-Technica AE2500
4
I used this mic for recording only, but I hear top bands have used this on tour with great results. There are 2 mic built into the capsule: a dynamic and a condenser.

I was thrilled when I first received this mic. Capturing sounds with 2 mics can get tricky as phase issues can be a demon destroyer. This mic solves the dreaded phase anxiety, as it sports a condenser and a dynamic in one capsule…brilliant!
I primarily used this mic on the kick drum. It was excellent in this application, as the condenser and dynamic were in perfect harmony capturing a wide range of nuances in the sound. Depending on the placement, you could easily get a killer drum kick sound of a wide range of styles. I especially like hard rock drums- plenty of attack with some low end power. Best results were with the drum just inside the drum hole pointing at the beater; this delivered a nice balance of snap and thump.
I used this mic on a snare top and was blown away- it sounded beyond great. But the problem was, compared to my 57, it just was a little too bulky for my slop technique…I like it on the kick, so that’s where it usually stayed.
I heard Metallica (or Megadeth?) used this mic on guitar cabs on one of their recent tours, so I happily tried that…it sounded good, the 2 capsule blend is really a great design. However, I like a 57 better than the ae2500’sdynamic, and I like the 4047 (and maybe the 4033) better than the ae2500’s condenser. Overall I tend to use my ribbon mics the most, so the while the ae2500 was a solid choice for electric guitar, it fell short in tone…but your mileage may vary.
In the end, I began to think this mic sounded really good on a lot of sources, but not quite the best on anything. I eventually began to use a D6 close on my kick with a 4047 or ribbon a foot or two away and found that sound to be vastly better than the ae2500. I imagine if I was running a club, this mic may be a good choice to have for the house kick mic…but I’m really loving the power and snap of the Audix D6. After 2-3 years of solid service, I sold the mic off.

Audio-Technica AE2500
5
The Audio Technica AE2500 is a very unique microphone that is to be used in the recording studio only. The mic is a dual element microphone, meaning that it has both a dynamic and a condenser capsule inside of it. It is specifically designed for recording kick drum, which is the only application that I’ve used it for. It’s got a -10 db pad as well as a high pass filter at 80 Hz. The pick up pattern is a standard cardioid one and it will pick up frequencies between 20 Hz and 17 kHz.

I don’t think that I’ve ever used a microphone quite like the Audio Technica AE2500, as I don’t believe that there are too many mics out there with both a condenser and dynamic element in there. I don’t know how this would sound outside of using it for kick drum, but for recording kick this sounds absolutely awesome. It’s a really full bodied sound, covering both the low end boom and the higher end beater sound very well, depending of course where exactly you place it. I usually also use something like an AKG D112 or a Shure Beta 52 A closer to the beater in tandem with the AE2500 placed back a bit. I find that between the two mics I’ve got more than enough to work with, as both produce very full sounds, making it easy to blend the two to my taste. I don’t think that the AE2500 would be necessary in a smaller studio, as the aforementioned AKG D112 and Shure Beta 52A do a great job for kick drum and are much cheaper than this mic, but if you’re in a larger studio setting where you want more options for different situations, the AE2500 is an awesome microphone to have around. I certainly try to use it whenever I’ve got access to it, as how can you beat having two microphones in one!

- What technology? (Electret, condenser ...)
Dynamic and static in the same capsule

From RAS usual Japanese srieux ... and finish that goes with nothing wrong ... perfect ...

- How long have you use it?
Almost 3 years in that sound.
- What is the particular feature you like best and least?
2 capsules in the same micro ... very convenient ... the bass drum sound is at once, but be careful, if the kick is rotten it is a waste.
With Beta52, you must enter the EQ ... He gets closer D6 ...
We must work with drummers who enters the dlire sound, otherwise works less well ...
- Have you tried many other models before acqurir?
I have a D6 Cygnus recently that I quite like, bcp used B52, SM91 or Beta 91, but D112, Electro Voice 868.
- How do you report qualitprix?
Ae, yes it is a little expensive, but not in terms of technology dploy here ...
I know of no microphone with dual capsule that price l.
I know of no other microphone with a static and a dynamic microphone in the same ...
- With the exprience, you do again this choice ...?
Yes
Did you find this review helpful?yesno
»
Read the 6 user reviews on the Audio-Technica AE2500 »

Other Audio-Technica other Microphones