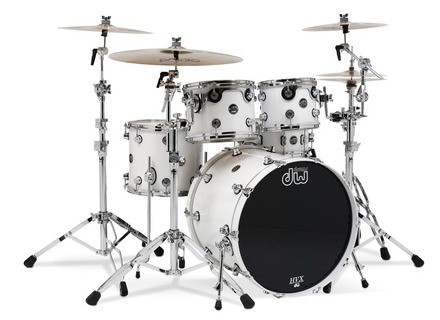 DW Drums Performance
5
DW and affordable don’t usually fit in the same sentence. However, I am a fan of usage before labelling, and thus, I took home an “affordable DW snare.” It features a renewable wood source of north American grown maple shells like most of DW’s recent offerings this millennium. I have found in the past, the maple DW uses provides warm sound that projects nicely regardless of dynamic room shapes. Also I find with this snare, it has a deep, punchy fundamental tone that goes real nice amongst the rest of my deep-dish set. . The stock head was a remo head and did not disappoint.

My unit color choice I chose was a dark cherry satin lacquer finish, which I think accents my setup really nicely. But again, I am going for tone, sound, and not looks alone, although it would be foolish to argue that looks don’t matter, because they do. Mine is a 5x14 inch snare, and has nice silver hardware. I enquired about getting black finished hardware, but was told it would bump me up to a custom snare order, which would bump up my price another $200+, something out of the question.

About the sound: it has nice sustain and amazingly great tone. I would go so far to say this is the best snare drum I have ever owned purchased new, that can do so much. I say this because I have realized it is a jack-of-all trades snare. When tuned tight the snare comes alive with an attack that goes amazing with pop music, more so jazz. That’s not to say it can’t do other things well, as I have tuned it looser to play rock, metal, blues, you name it. This snare comes through with a clear punch. What more can one ask for? Cheap, nicely made, looks great, plays amazing, can do a ton of different sounds, and can take a pounding.
Did you find this review helpful?yesno
»

DW Drums Performance
4
From the moment I pulled the DW Performance Series out of the boxes i loved them. They look amazing, and sound just as good.
I'm a wood grain type of guy, so i love the transparent stain finish, and the hi gloss overcoat just adds to it.
Comes with a nice DVD, tells you all about the drums, and gives tuning instructions, so even if you don't know how to tune a kit you'll be good to go.
I have to specifically mention the snare throw off, it's magnetic and really easy to operate. But the greatest part about it is when you throw it off, it's way off, so when you want to play without the wires, you get a nice clean sound without any buzz, no matter how tight you keep the wires when they're on. It's pretty much the best throw off I’ve ever used.


I have been playing for about 6 years and in that time I have played many brands of drums, Always wanted a DW Kit after playing one a few years ago, So when this Kit came out at a reasonable price I had to do it! and was I glad ....these drums are unbelievable, every other kit I have bought I always changed the heads straight away , not these the sound is great even with the heads they come with! The white Ice color is cool. Plus looks great under the lights. I have always played a metal snare. But this snare has a sound that makes you want to play and play, cuts through the whole band and they even remarked (What a Snare sound) I first bought the 22" Bass Drum and the 3 Toms along with the 6.5 X 14 Snare and now I just ordered the 14" floor tom and the 7X8 tom to complete this Great kit!!

Did you find this review helpful?yesno
»
Read the 5 user reviews on the DW Drums Performance »

Published on 10/11/10
Drum Workshop Inc. recently announced the addition of a mid-priced production drumset to its line of custom-built DW branded drums.