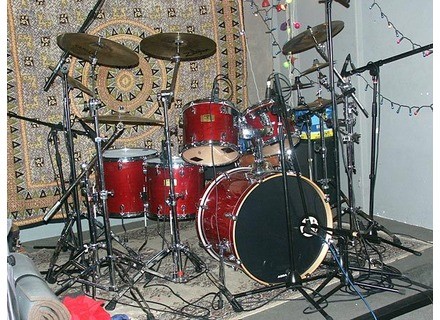 dinothedrummer's review (This content has been automatically translated from French)" Really"

Mapex M Pro studio
5
And configuration information about the Mapex Pro M Studio I own:

I use it for over 5 years and I am very happy, I bought new by mail order after having tried a friends house. I ordered the game was only for the simple reason that it was my 2nd drumkit and I bought a DC at Rock capelle anniversary of the same color 1 year ago (yes I chose the color of kit based on my CC). at the time of the blow a bit more expensive now than at the onset and M series Mbirch Mapple who replaced Mr. Pro series (I digress)

What I like most about this drumkit is the excellent value it displays. But all this does not mean much if you do not speak of the bulk that is sound, and what SOUND! It sends the wood so to speak. At first I was not convinced when I played with the skins of origins (I must say that I do not like when his drooling and there are plenty of harmonics in every sense) but a After Evans Hydraulic climb (it's the skins oil bath for those who do not know) and although the attack of madness well broadcast keeping some control. It was just the sound of the drum brutte instant and without this one sounds too long, just what I like. And bass drum and what is a cannonball, no need to put much in the bass drum. As I keep only the net attack and very little vibration events (for my taste) it is a pleasure for the sound engineer in the studio and on stage (sisi I could give you names that you confirm)

What I like least, eh bin until February I would have said that there was nothing I complained that this drumkit but after five years of faithful service and good reasons to an average of two concerts per month plus 2 to 3 repetitions per week one of the screws attaching the tom 10 "is broken. Well I think in hindsight it's been a lot of assembly and disassembly but had since a negative point.

I had a 2-year strength sonor 2003 (if I'm not saying stupidity) that was not bad but I wanted to start at the time was over and a drumkit of superior quality to put across (disease the young apprentice drummer) and I have not been disappointed. I also played on batteries Pearl Vision, ELX, sonor delite on the brand (more expensive), gresth (not a fan but good stuff) DW (much more expensive but top) short I played on many model different and it's actually an opportunity to have found a good deal (for the time) and that it matches my CC was that I took. I played more and more I realize it has its own character especially mounted in this configuration.

Today I do not play in a configuration that almost 12 TT, 16 TB, GC and CC. I only use very little of other 2 toms 10 and 14. This is why you find it on sale in the ads. But do not forget a thing is a drumkit with its character, therefore it is better to try it before buying it but when you love what you fell in love with her. To be honest this drumkit made me proud to service and I regret to part with it and even today if I had to buy a drumkit with the same budget at the time I would do this choice without hesitation. I separated because as you can imagine the lack of money to buy a new one and the place to store two batteries I miss terribly.

trancestep's review (This content has been automatically translated from French)