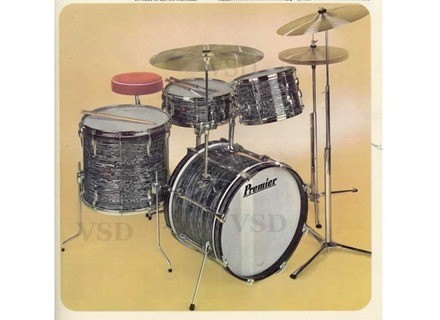 Premier 202 Drum Set
5
The Premier 202 Drum Set is a kit from the late 1960's with a big sound. While it's definitely an old school sounding kit, it's still really tight for it's age. We have this kit at the recording studio that I work at, and it gets used quite a bit. We have a few different drum sets including a vintage Ludwig and a number of snare drums and accessories, but I would say that more or less this is our main kit. It's not going to be the best choice for all types of music, but we do mostly indie rock and it works great for this. I think that there are probably a number of incarnations of this kit in terms of different drum sizes, but ours is a four piece kit consisting of a 22" kick drum, a 16" floor tom, and both 14" and 13" tom toms. I don't think we have the original snare for this, or at least it doesn't get used with the kit that often since we have so many others. I'm really a big fan of this kit as it's one of the best sounding kits I've used from the 60's. I don't know how easy to get these kits would be, but since they're pretty old I would think that most of them wouldn't be in great shape. While I don't know if it would be worth it to seek out as your main drum set, it's definitely a perfect compliment drum kit for drummers looking to get another type of sound. Don't get me wrong, it could definitely be a great primary kit, it just depends on what kind of sound you're going for. Don't know much about the cost or anything like that, but the Premier 202 Drum Set is definitely something worth checking out for any drummer!
Did you find this review helpful?yesno
»