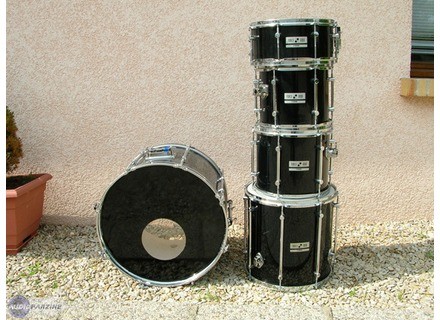 Force 1000, Drum Set from Sonor in the Force series.

The (+):
Compared to Pearl Vision I squatted at the studio again, and though I much prefer mine, but it is true, I spent some time to master its tuning.
I find the sound of the bass drum perfect (see the skins with muffler included above, plus a convoluted foam placed inside, and I use plastic bats).
The same sound technicians and other drummers who have tried have already told me that the snare sound was not bad at all, certainly better than some higher-end snare drums (probably incorrectly set by the owner) .

The (-):
The hardware sold (at the time) was poor with the foot of the CC and Charley were dropped in the road.
Also I have 2 toms with rust. It was the former owner who has completely stripped because it was starting to crack (maybe he was storing in a damp place, or with large temperature differences).
The screws for skins on top of Tom began to tire low: they become loose while I play, but it's in my control propablement enough (I like the floor tom being in very severe).

Without knowing instead I made a very good deal at the time, because although common, is the wood is of good quality and has hardly changed (this is not cons-plated), drums Once well tuned sound so very correct (must still be stored in good conditions).

In fact it is a good drumkit versatile enough, and it allowed me to properly introduce me to the instrument settings.
I am very pleased with this acquisition, I do not sell it (I lend to my nephew ^ ^) but I'm still going to invest soon in the more upscale, like Tama Starclassic.
Did you find this review helpful?yesno
»