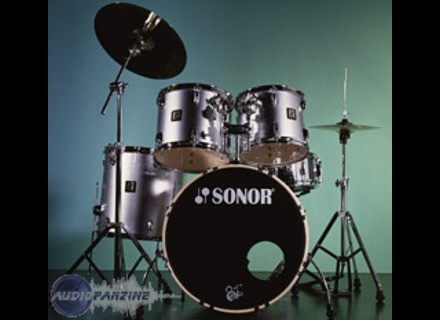 Force 1001, Drum Set from Sonor in the Force series.

Sonor Force 1001
5
I inherited a Sonor 1001 from my deceased uncle. The color is a nice wine read and the drums sizes are the rock sizes. I am impressed with the quality of this kit that is labeled an entry level kit. I'm 50 and have been playing drums since I was 9. My current drums are Vintage 60/70's Slingerlands. This Sonor kit is one nice kit for the money they went for. The model is outdated but the kit was brand new when my uncle passed.

I think my uncle paid about $300 or $350 for the kit in 2006. He bought them at a store in the Bay City/Saginaw area in Michigan. His purchase was to just dink around when he got bored. I believe he bought them as a close out item. He was a miser.

I like everything about this drumset. The color is vibrant. The shells are solid. I replaced the batter heads with Evans G2 and these things rock. I put a Aquarian Superkick
II on the BD and it rocks. I'm not real used to the power toms so I only use the 12'. Even though i'm 6 ft tall the kit feels real big to me.

The only thing I don't like about this kit is the depth of the toms. I would much prefer the standard 8x12 and 9x13.

Excellent quality and contruction on the shells.

My final thoughts are the Sonor Force series far outshines the competitors in quality for the money. In retrospect I also realized that these were the same drums being played by most of the cat's on Bourbon Street on my visit to New Orleans in 2007. You can't go wrong with these drums.

Sonor Force 1001
5
I ordered the Force 1001 from a national catalog that was blowing this particular model out the door to make room for the "new" Force 1003. The asking price was $399.00 for a standard "rock" five-piece and included a bass-drum pedal, snare stand, hihat stand, and mini boom stand. I planned on using this kit as a secondary, practice kit, but now gig with it weekly!

The Force 1001 stage kit is a very well-build drumset and an excellent value for what I had paid. The kit came in Reflex Silver, which has a bit of sparkle to it under stage lights.

The sizes, 12, 13, 16 inch toms, 14" snare and 22" inch kick are the standard "rock" sizes that have been in vogue for over twenty years. All drums tuned up nicely, that is, AFTER I swapped out the stock (read: cheap) heads with Evans G2 coated on top and G1 clears on the bottom for the toms. I also put an Evans EMAD on the kick batter, and a G1 coated on the batter side of the snare as well as a 300 "Hazy" on the bottom. With the price-point of this kit, I could well afford new heads all around.

The hardware is functional, especially the tom mounts, which include the omniball system for excellent placement of the rack toms.

The overall sound is very good, especially the kick and the snare. The bassdrum just thumps with the EMAD system installed, and the snare has a very throaty crack, with a great deal of sensitivity.

Probably the weakest link in this particular line of drums is the bass-drum pedal. It is pretty sluggish, but that's only because I've been playing a DW Turbo 5000 for the past several years, so I'm used to a very good pedal.

The shells on the kit are 9-ply basswood, which give a fundamentally low to midrange tone. The snare is metal.

The floor tom just growls and the 12" rack tom tunes up nicely. One problem I have however, is getting the 13" tom in tune with the rest of the drums. But let's face it, can ANYONE ever get this drum in tune on a five-piece kit? So I generally only play the four piece, sans the 13" tom.


At $399.00 for a five-piece kit plus hardware, you can't beat the quality of this drumset. Although it is listed as a "beginner" kit, this drumset can easily be played by semi-pros looking for a second kit. I also highly recommend this kit to any parents looking for their son or daughter's first drumset. It is a far better value than some of those cheap, student models manufacturers are passing off as drums.