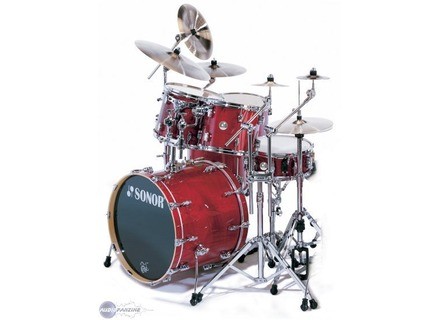 Force 3005, Drum Set from Sonor in the Force series.

Sonor Force 3005
5
The Sonor force 3005 is a really great intermediate/higher end kit.  It is comparable to other affordable maple kits, such as the Yamaha Tour Custom or the Taye Studio maple.  All of these kits are great, and the Sonor Force 3005's certainly make a good case for the best value at this level.  I always wanted to play these drums when I heard about them, and when I got my first chance they met my excessively high expectations.

With its thick 9 ply maple shells, it produces a loud sound.  The toms sound huge and have great dark warmness to them.  The bass drum is perfect, one of the best I have heard at this price range.  It has a great boom that really shows the thickness of the maple in the shell.  The snare is excellent as well, really warm sound.  It has a certain natural ring to it that is very desirable, and it sings in a musical way.  The hardware of all the drums is sturdy and extremely easy to set up.  The lugs are also numerous, allowing for more precise tuning.  The hardware that came with the kit I played felt really good, as the bass drum pedal was quick and the hi hat foot very responsive.

The kit that I play has a natural finish, which is my favorite in this line.  All the shells look great, but especially the natural finish.  Under stage lights, it reflects and absorbs the colors in brilliant ways.  This is definitely one of my favorite looking kits I have seen.  Like the other comparable maple kits in this price range, it is an excellent value.  This semipro level is perfect for musicians who want a bit more than intermediate but can't quite dish out the coupke grand for a custom professional kit.  The Sonor Force 3005 is an excellent value, and produces excellent sounds.

Sonor Force 3005
5
(Originally written by ryo hazuki/translated from Audiofanzine FR)
This Force 3005 is simply amazing. The overall finish of the drums is wonderful (I chose the autumn high-gloss model). The accessories provided are very good and comprehensive (HH and BD pedals, snare stand plus 2 cymbal stands). But let's get to the point: the sound blew my away! First of all, the Force 3005 produces an impressive powerful and loud sound, especially the bass drum. The maple shells provide a very warm sound with a present low-end from the bass drum to the 10" tom. The snare is ok for a set sold as a whole, but it's definitely not one of the highlights of the kit. The original heads are ok if you like to have an open sound. As a summary, test this Sonor drum set if you can't afford a high-range one. Its value for money is excellent and you won't regret your purchase!!
Did you find this review helpful?yesno
»

I've been playing drums since the 70's. I've played virtually every music style and I've owned many drum kits. I started to play again after a break. I needed a new drum kit and I didn't want to spend too much money. I looked for a mid-range instrument. I found a Sonor Force 3005 on sale.

I've been playing this Sonor for nearly 3 years. The sound is powerful and rather warm. Sensitivity and responsiveness are very good (you can play soft and loud with the same results). The instrument produces nice overtones and it is easy to tune. You can feel the 9-ply maple shells (3x3). All musicians I've played with found its sound very powerful, nice and precise.

The hardware is not so bulky as on bigger models and it is very good. The drum kit has no real flaws and it can easily compete with much more expensive drum kits. Weak point: the snare provided isn't bad but I find it a bit too "light" with an average responsiveness. You will need to, at least, replace the top heads of the toms (even with Remo Ambassador Clear) and buy another snare. Once you do that the drum kit sounds like a top-range instrument.

I needed a sensitive sound with a good response allowing me to play soft or loud. I first wanted a sound with resonance and overtones (very well controlled on the kit) and without damper. I used Remo Suede Ambassador heads on the top and Remo Diplomat Clear on the bottom. The overall sound is open, slightly dull and very well balanced. The sound of the 3005 toms are not as full and round as a Delite or a S Class Pro. They are perhaps slightly less powerful but still far above the average in this price range and quite close to the Delite. With these heads tuned real tight, the toms had a hollow sound (not as full as a Delite), but 6 ft. away and further the drum kit produces a resonant and singing tone very common in high-class drums (typical Sonor). Recorded with overheads this drum kit sounds great with a nice resonance and a well-controlled response. On the kick I put a coated Powerstroke Ambassador that gives it a duller response compared to the original head. The bass drum sounds very powerful, deep and accurate. It's difficult to get a better sound!

This drum kit has an exceptional value for money, much higher than the average, and it can easily compete with top-range kits of most brands.
Did you find this review helpful?yesno
»

Toms: quite round and warm sound (maple)

Bass drum: great!!! It's the best of the whole kit!! Perfect big sound!

Snare: quite inaccurate sound. It's the weakest element of the kit, but it's still playable ! And it's normal since you can't expect an excellent snare when you buy a complete drum kit.

You get a complete semi-professional instrument for an affordable price!!!

I would definitely buy it again since it would be difficult to find a better product in this price range!!!
Did you find this review helpful?yesno
»
Read the 13 user reviews on the Sonor Force 3005 »