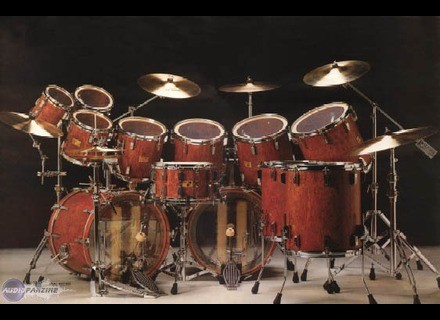 Sonor Signature
hello,
I own one of my first Signia time blues funk fusion, and as I play the big rock at the moment, I was looking for the drumkit of my wildest dreams, a "sound signiature" but as the prices are very high for this kind of instrument I just abondonné, when one day I found an ad on a sonor signature special edition, very rare model as barrels painted brilliant and not mâte.j 'I jumped at .24 Dec. 14 16.
I am not disappointed, it is in my expectations, very difficult to adjust the matron but so happy! of the big 24 sends the pate and frankly it's a model that is beautiful to watch! I have and that's long!!
it's called "JOSIANE" the snare is a sonor signature brass by 14 6
this
Did you find this review helpful?yesno
»

Sonor Signature
5
I use it for one month
Unfortunately when I purchased two used was:
Tom of a 13 * 13
1 large box of 24 * 18
then first the drumkit dcline the two types: heavy shell in beech, birch shell light (that's the one I own)
and well despite the flattening of the shell was light birch is a thick one !!!!!!! dmentielle Exceeds 1cm ..... thickness of sound in brief its best !!!!!
the other, the screws!! surprise even the threads of the tie rods is twice as balaize tie upscale classic .....
then the sound ..... one wonders what it's going to see the kind of OBUT it ......
it's rock rock rock !!!!!!! tom 13 * 13 team by emperor transparent for typing sounds very deep (no not have a sound all mushy) provided the best sound in the tunings are quite dtendues, it is fairly easy rgler.La projection it is HUGE !!!!! I have never heard that before! having dja jou of orion, Starclassic, custom maple .. .. is the signature that has the best projection!! knock on the tom and you tremble!
so now the best for last: the bass drum ......
I bought a quip events in rsonnance unfortunately a bit bulky for my taste
and a stripped pine ... in short strikes in the skins at a disadvantage!
and no fault was the power of 24 * 18 is l!! power standard, many low frequencies (it feels good underfoot) and also the gently flapping! ! was a large but its really very easy argler in the absolute: it was the sound instantly. the system of double internal mute is very ffective, it is a dual band felt that rubs the skin to hit with a wing screw on the RULES varying contact surface for a more matte or less, forget skin type II superkick Aquarian, Evans EMAD or other ....
is a drumkit that sounds in three words: GRAVE, MAT, POWERFUL
here no need to leave the tape for any matter ......
it gives me a drumkit rsolument rock is a different sound than the high end of today, less brilliant, less shade .... this is the true sound of rock Chire without finesse, a bit in the vein of tama arstar 2 !!!!!
Over time it is clear that I would redo this choice especially since I did not pay my CHRE two barrels, the problem is that these are rare and super batteries Cher g nrale!! advice to warriors go to Germany to find this stuff has the best price ...
Did you find this review helpful?yesno
»

the wait's review (This content has been automatically translated from French)

Sonor Signature
4
I was fortunate to play on this instrument during a period of about six months during a turn.
Terrible is the word that best applies to this monster.

to be short and simple: Atomic !!!!!
any time you tape it, the barrels are deep, and take off your ears every keystroke, the bass drum is fabulous, it was she who flies you, it is really powerful, really.

I like the least, its price, it has no comments.

Personal, currently I'm still on my strength in 2000 (with some improvements to +) and ca is more than enough for what is below the elbow.
I also tried a lot of different things because of my job, and I saw many brands and models very interresting, even in low price.

klitprix the report is the measure, not the price but Klit.

if you have one, I will rid free, I promise.
We can dream all the same .....
Did you find this review helpful?yesno
»

juanrosset's review (This content has been automatically translated from French)" WOW!"

Sonor Signature
5
A crazy thing!
I bought it have one month for 950 € (10 12 13 16 22) + cc for 475 € in germany it was waiting for years!
anyway it sounds huge for the price I got a bowl only problem toms 10 12 and 13 were re-cut by one of the summers propios (the guy is crazy!) for an investment that but it sounds better anyway
If you are looking for a sure go for it!
Well I gotta go I gotta admire again!
Did you find this review helpful?yesno
»
Read the 5 user reviews on the Sonor Signature »

See all 68 photos of Sonor Signature »