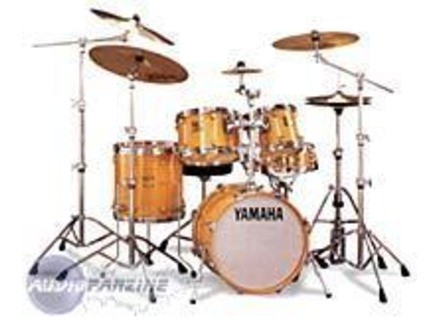 Yamaha Maple Custom
I bought my 11 pcs, Yamaha Maple Customs in Brampton Ontario Canada 8"10"12"13"14"15"16"18" and 2x22" and the manu catchi snare, they are by FAR the best drums on the planet, I was the very first to buy the complete kit, and Yamaha Canada gave me a coat and a photo shoot. I will be berried in them when I die.
Did you find this review helpful?yesno
»

Yamaha Maple Custom
5
Yamaha’s Maple Custom drum kit is a high quality set of drums that is suitable for uses of all types. This kit is unlike the Stage and Studio Custom series of Yamaha drums, as it isn’t best suited for rock like the other kits are. At least in my experience with the kit, the Maple Custom is great for jazz and lighter genres. I’m not a drummer, but the drummer that I primarily work with has this kit, so I’ve recorded it a number of times and have even tried my hand at playing it as well. I believe that you can get the Yamaha Maple Custom kit in a variety of forms in terms of the make up of the different drums. The one that I’ve used has a kick drum, a snare, and two tom toms – a floor tom, and a rack tom. While I don’t know the exact sizes that the drum set came with, the kick drum is well below above in terms of size. This makes for a boomy sound kick, which is great for jazz. Generally my friend doesn’t use the snare drum in the kit, so I haven’t heard too much of it, as he’ll switch out different snares for different settings and songs. The tom toms are crisp sounding, with a lot of slap to them. Often for recording we’ll take pieces of this kit and mix them with his Yamaha Stage Custom set, as it’s helpful to mix and match for different situations. However, many a times we stick with all the drums from the Maple Custom kit, as it really does sound great in the right situation. The kick drum is the main drum that we’ll switch out, as it isn’t best for rock since it’s on the smaller side. For what the drum set can do, it’s nearly a flawless kit with a big sound and impressive versatility. The Yamaha Maple Custom isn’t a cheap drum set, so it’s definitely going to be reserved for experienced players and professionals, but if you’re in the market for a top tier kit and have the money to spend, the Yamaha Maple Custom is an awesome choice for your go to drum set.

Yamaha Maple Custom
5
I have owned this set for about four years and I can say without a doubt that this is one of the best drum sets ever made. If you're looking for a fat, huge sound, the Yamaha Maple Customs are the way to go.

First big plus- the snare drum. When tuned just right this drum gets that disgusting snap reminiscent of Sting era Vinnie Colaiuta. This may be due to the 7ply x 7mm. Construction- versus most 6ply x 6mm. Shells.

The Bass drum sound is extremely fat. It features a 10 ply 10mm. Maple shells. This is really amazing when you compare it to the industry standard of 7ply 7mm. Shells. At 10x10mm. The maple custom comes up with 100mm of shell versus everyone else's 49mm (7x7mm.) shells- You're literally getting just over twice as much drum. All this makes for a seriously unbelievable sound but brings these drums only true drawback- they're freakin heavy! If you're looking for a set to throw around town this is not it- a 22 inch bass drum in a hard case will pretty much kill your back as I can attest to. (If you've got to case them up and throw them around- for the bass get a hard case with no foam padding and a soft case. Put the drum in the soft case to throw around town and then put the soft case in the hard case for tours and such).

One thing I'd like to say about these drums is that they sound very different from the 'Maple Custom Absolutes.' I have a friend with the same drums in the 'Absolute' series and they don't resonate as well. The biggest difference is the snare drum- I even borrowed his for a week to see if I could get the same sound as my snare drum and I just couldn't get it. His drum was a little darker and just didn't have the same synergistic pop through the whole drum that I get with the 'Male Custom' snare (14x5.5). Its not a HUGE difference, but in my opinion if you're going to invest in a set of drums at this high end, go all out and get the sound you're looking for, otherwise you'll be left with yet another drum that ALMOST gets the sound you're looking for but not quite.

Another great feature of these drums is that they're REALLY loud. I frequently play these drums behind a very loud, highly amplified, special event party band. I play without micing them and I never have any problem playing over the group.

These drums also retain they're tunings remarkably well (even after I play with the aforementioned group!). I very rarely have to re-tune because my drums pitches have dropped. The snare drum is especially good about this- I almost never have to touch it unless I just want a different sound.

I have a 16x16 floor tom I've converted to a bass drum on this kit to play in jazz situations instead of the 22x16 and it sounds okay. These drums are much better suited (in my opinion) towards getting good rock and roll/funk/r&b sounds and volume level than acoustic jazz situations (piano trio, etc.). Honestly they just ring too long and have too bright a sound. Not a bad jazz set- but they really aren't optimum in my opinion.

These drums are expensive, but in my eyes are the TOP of the line, rivaled only by the Yamaha Recording Custom drums, and are well worth every penny.

karmanu's review (This content has been automatically translated from French)" norm! !dropoff Window"

Yamaha Maple Custom
5
First of all do not rely completely certain notices cans like "a drumkit without +", "difficult rgler tatati tatata" or "the soundman can not (and although changes of mtier) or vendors told me that Yamaha GC had nothing in the bag (like they change mtiers).. No comment! they do not know what they are talking!

First of all before addressing the subject, I wanted to say before I had a SONOR DELITE and PREMIER SIGNIA to put you right in the bath!

This YAMAHA MAPLE CUSTOM is overkill! Much more than the Absolute!
The bass drum (22 by 16) to mine is a neutron bomb!
10 plies of maple against 7 for the absolute (GC I get)
It surpasses the two models above cits in terms of power and thus attack! !dropoff Window The term "huge sound" for dfinir is really appropriate! they have not tromps! But not at all! !dropoff Window

For my part I prefer the GC 22 by 16 by 22 dsormais unlike the 18 that I had before my models prcdents (more attack and precision without remove from the serious to the cust Yam map!)

I also love the toms, they really have something to typs !! they sound like one. .dropoff Window Yam map cust!
Very sensitive, singing, very nice sustain, powerful! Anyway all that we are entitled to expect a HDG! With its typ therefore, as Sonor elsewhere, which for me are the two brands that dmarquent the rest (DW, Tama, Pearl etc.).

Super fund, a killer! 1 opinion a true, you can trust me! !dropoff Window
Did you find this review helpful?yesno
»
Read the 8 user reviews on the Yamaha Maple Custom »