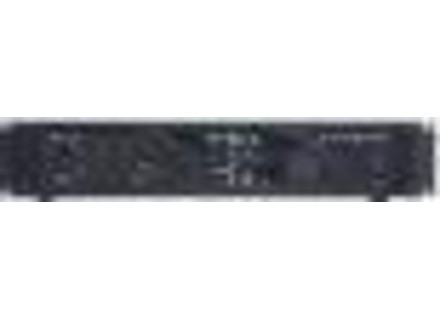 AS 620, Dual-Channel Power Amp from Audiophony.

renaud.gimenez's review (This content has been automatically translated from French)" resistant ... but low?"

Audiophony AS 620
3
I use it almost every day at least 1 hour at full capacity often exceeding the safety clip ... low frequencies ... that clip that clip! and yet it would still blow.

its advantages? it goes everywhere and accepts its very 2x220w

disadvantages? the fan so noisy at very low volume or in case of limited use on stage it is very audible ...
protections probably a little too strict on bass because I constantly monitors clip LEDs that are often lit but still no problem ... I play even push out of bounds protections and so far it has never popped ...

often working in small rooms I would do this not because of fan purchase. However, this sound quality and durability are very correct I do débarrasserais for anything.

I will do it again without eSite choice because it is reliable I made thirty evening with a 4-oms are really moving his pa with his formidable felisite I am every night.

pa is the amp I miket the board or a qsc rmx much of its worth is
apart from that is asimetrique but for € 100 less on the nine
Did you find this review helpful?yesno
»

armando54's review (This content has been automatically translated from French)

Audiophony AS 620
5
- How long have you use it?
less than a month, just for one night to the moment

- What is the particular feature you like best and least?
its simple design is pro, the least weight, it looks like everything is heavy in DJ

- Have you tried many other models before acqurir?
no, it's the first I

- How do you report qualitprix?
trs is good, finally I think, although it does have t 2X250W in 8ohms speakers to go with them that are in majority AudioPhony 250w rms

- With the exprience, you do again this choice? ...
well, if I could afford I would take even more powerful and the speakers, but for this price, if you seek a little and you find not CHRE, it is well trs.

For résumé during the night, I did it at full power for 8 hours, and the fan crach soft and silent cold case, in my opinion it has proper ventilation. I'll see if loose with the future, but for now I am satisfied trs. But I do it again this election if I buy an amp with the same power. Well worth the score of 9 out of 10.

Audiophony AS 620
4
- I use it for three months pregnant with developing 350 watts, this is for my turntables, my electric guitar and the sound of my pc.

- Assets: power because the sound is very strong (I did not exceed half the volume knob), the "clip" which are two LEDs that light up if it does not follow from the speakers to the amp which avoids grilling the speakers and especially it does not heat!
- Cons: quite noisy fan but at least it's not heat and as soon as it increases the sound can not hear.

- I have tried this model.

- Yeah I do it again, at this price it is nickel. Too bad it's not a little quieter.
Did you find this review helpful?yesno
»
Read the 9 user reviews on the Audiophony AS 620 »