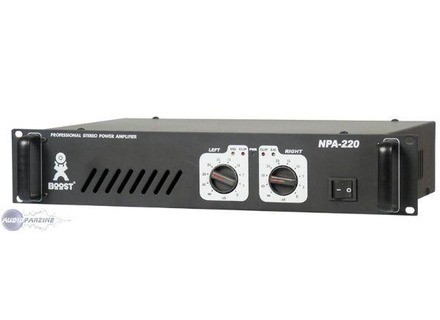 Boost NPA 220
3
I use this amp NPA 220 for a little less than 1 year and I am very satisfied, 2 amp used in both 4 ohms 8 ohms or bridge to get a good amp is no puissance.Cet a high quality yet good value qualitprix (can be heard by the grsillement hp in a power-up). Prior to this amp I had an amp 4 times less powerful but with a higher sound quality leve, I pay the same price avai for lower puissance.J 've made this choice a matter of money, I pay a price the quality above.

Boost NPA 220
5
I use this amp now for a first amp ans.C a cheap price but has a quality to be superb. I use it with speakers 150w jb system and the quality and really supert. g never had a problem with this amp I will recomand fortement.g try two other amp models that do not follow all of that with the one that made the soul. the relative quality and price you want bien.Si really good equipment for cheap I highly recommend it.

manudox's review (This content has been automatically translated from French)

Boost NPA 220
1
Boost is a trademark avoid at all costs, if you want an amp boost worse o take the PX!

This is a SERIES CRVE membrane, you want some distortion in voila, I even tested it heats up a cold without charge and the sound is abysmal, to find one little 250 peavey or yamaha and the qsc 400, alor pouruqoi do without

dave4's review (This content has been automatically translated from French)

Boost NPA 220
1
I've had four months. What I like most is that it does not make too much noise when turned off and it burns well! What I like is that it's not the shit! He has no power, it is better now to put a little more and get a mac mah behringer or else! The fan and worse as the engine of my car (though it's a diesel!). I baucoup not try the others before it but still ... I tested 6ou7 for the evening, but frankly that is the NAZZZZE! The price is low but it's true for something so rotten it's too expensive! He quickly distortion when it is pushed a little! Frankly with the experience I will take it!
EDIT: I forgot that I turned 4 hours at half power and driven out to still ... head instead on the mac mah ca is cheaper even if it's not mac mah high teak is widely mieu is the sound quality is correct even when

Did you find this review helpful?yesno
»
Read the 5 user reviews on the Boost NPA 220 »