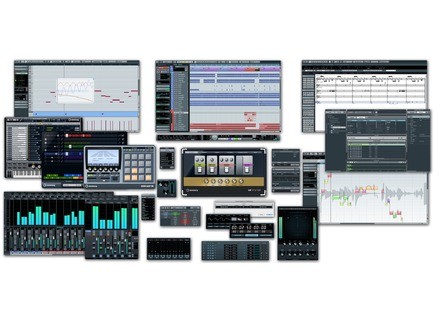 Cubase 6, General Sequencer from Steinberg in the Cubase series.

Cubase SiX While Avid and Cakewalk launched the new versions of their respective flagship sequencers just before Christmas, Steinberg chose NAMM 2011 to present the wistfully awaited version 6 of Cubase. This new version doesn't mess too much with the foundations of the sequencer but rather brings many new features regarding handling and functionality. Read more…

Steinberg Cubase 6
5
I ordered Cubase 6 in January of 2012 I found the application very easy to install as with the older versions of the software. I didn't need to use the manual but I thought I'd go through and learn some new features since I haven't used the application since version 3 (yes I've been that out of tune with the app). I've used version 4 at a friends house but never really dug into it like i have with Cubase VST, Cubase SX and so forth. If you've used any version of Cubase SX you'll be able to move around cubase 6 with ease. I had no problem getting around the application at all but if you haven't used cubase the manual is user friendly

I've been using Cubase 6 for a bout a month mainly for small vocal recording projects. I use it with windows 7 operation system. For me the experience have been nothing short of great. I haven't had any crashes or compatibility issues. The plugins I use a long with this DAW are

I also use Reason (in review mode)sometimes and it's been smooth. I don't have a ton of ram on my system (laptop) I'm running it quite well with 3 gigs of ram and a Dual Core Processor. if you can get a strong processor or have one that would be excellent and serve you well

What I like most about Cubase 6 is it gets the job done. I was able to import older projects i had created into the new version without a problem. Cubase 6 was easy to pick up. Most people say once you've used one DAW the rest are pretty much the same. I find this to be true but especially true if you've used cubase before. I do wish the application was a little cheaper $300 but I mean I wish everything was a little cheaper. I've worked with many other DAWS such as

Cubase has always been better in my opinion as it's excellent in handling both audio as well as midi. Pro tools is good but not so versatile when it comes to midi Logic.. I could never get past the gui I love sonar but cubase just works for me better... Sonar would hiccup and crash Cubase not so much
Did you find this review helpful?yesno
»

Steinberg Cubase 6
5
Same old procedure...order the boxed version...wait...install. The install went without a hitch on both my PC and OSX set-up;
As a side note the Steinberg manuals are well written and easy enough to find anything quickly

On my Mac Book Pro 2.4 Ghz laptop...8 gb of RAM with the Motu 896mk3 that is a rock solid mobile recording set-up. I've been using Cubase since when it still was Cubase VST, which is more than 10 years ago. I also use Nuendo, Protools, Logic and Samplitude/Sequoia.

The biggest difference for most users that spend a lot of time in their DAW is whether the User Interface is bearable. From day one I preferred Cubase's and its bigger brother Nuendo's GUI to justt about anything.
In addition to this little things like unlike in Logic the software instruments aren't actually ancient. I love the VST 3 protocol for plug-ins. The way Cubase lets you comp tracks with their approach to separate lanes makes editing a breeze.
When tracking a band without a click track tempo mapping the recording is the fastest I've seen.
The included plug-ins, especially the Cloner are some of my favorites.
The stereo spectrum on tracks can a pan, balance or two individual controls. There is the talk back set-up which makes setting up separate head phone mixes so easy without a physical console.
Plug-ins can be run in addition to the usual insert or send concept also as an insert on the input if ever the need arises to print a plug-in.
Plus you can route the same input to multiple tracks.
Unlike ProTools or Lofic I've never had an issue opening an OMF session regardless of whether it cam from Logic, Protools, Samplitude/Swequoia or anything else.

The new amp simulations plug-ins are on par with the competitions, which unfortunately they're all useless to me.
Did you find this review helpful?yesno
»

Steinberg Cubase 6
4
Steinberg Cubase 6 is, just completely like its predecessors, one of the biggest trials to set up, unless of course, you already understand Cubase and its ins and outs. What ends up happening is a massive polarity between people who already know everything about how to use the program, and people who have never seen Cubase before and are wondering where the option for routing audio, and setting up inputs and outputs, and how to actual get Cubase to listen to their set ups. Cubase is a mess right now when it comes to intuitiveness. It has seemed to reach a point where its main goal is not to attract new customers, but to retain them. And while I cannot attack Steinberg for that incredible marketing decision (hint; people who use other digital audio workstations are enamored by Cubase 6's features) I still cannot give Cubase a high score in this sector. I am being generous with this.

Cubase 6 runs a lot better than Cubase 5. I do not feel the need to bring my set up to attention because that is a simple fact that objectively quantifies Cubase 6's performance. Something about the update meant that Stenberg was secretly working under a bit more motivation than to include VST expression and a prettier and shinier graphical user interface. The simple fact about Cubase 6 is that once I got past all of the set up, which I already know how to do, but keep in mind, those of you who are reading this review because you need to know, still quite broken and unintuitive. I ramble. The point is, Cubase 6 runs far more stably than Cubase 5, and that is certainly something that I would not have let Steinberg get away with.

Cubase still suffers from that mentality that everyone who buys the program knows exactly how to use it. This may have been true back in the earlier 90's, where the people with computers had to know quite a bit about how to use them before jumping on, but for goodness sake, Steinberg, you need to figure out how to make you digital audio workstations prettier! Anyone can call me shallow, but the simple point is that long time Cubase users already know the program, and will love it no matter what because they are used to its ins and outs. Cubase 6 still has not figured out window management, and honestly, despite all of its beautifully implemented improvements that I will not bother mentioning because everyone else has, Steinberg needs to figure out workflow.

Steinberg Cubase 6
1
When you invest $600 in a product you had better be sure it works. And if it doesn't, good luck getting support from this company. It's emails, emails, emails and "we'll get back to you immediately." Sure thing and boy can you go crazy when you discover issues concerning Steinberg's continued obsession with all sorts of copy protection mechanisms. After the money is collected, you've got no leverage. As a result of my own problems with Steinberg having been a very long time customer, I've just given up and looked at other alternatives which are surprisingly great for half the price. They just built something new from scratch instead of heaping on more slop on this app that has its share of issues which you can read about anywhere. It takes an advanced degree to figure out how to do simple things. Before accepting the fan reviews here, ask yourself how a company could get a long time user of its software this mad. I'm a regular guy like you and I've just seen what can happen and have the electronic evidence to show anyone who cares. Major thumbs down.

I've been using Cubase for over 15 years, seriously. Some things are very good but a good number are far more difficult than need be. And the latency issues at times...

As I said, if you're dealing with severe copy protection methods like are in this program, ask yourself if you want to blow serious money with a company not decent enough to provide reasonable support. I'll show you numerous emails, lack of answers, and you can't call them --- you have to wait for them to call you. There is a reason why so many new competitors came out in this market and after having them screw me repeatedly with their lack of desire to deal with customers and keep cash by limiting support, I have seen the light. Don't believe fluff reviews and fans.

Did you find this review helpful?yesno
»
Read the 23 user reviews on the Steinberg Cubase 6 »

Last updates for Cubase 6.5 and Nuendo 5

Published on 07/25/13
Steinberg corrects remaining bugs in its Cubase 6.5 and Nuendo 5 DAWs with this ultimate update.

See all 89 photos of Steinberg Cubase 6 »

View all 6 videos of Steinberg Cubase 6 »

Listen to the 15 audio files about Steinberg Cubase 6 »

Steinberg Cubase 6 manuals and other files